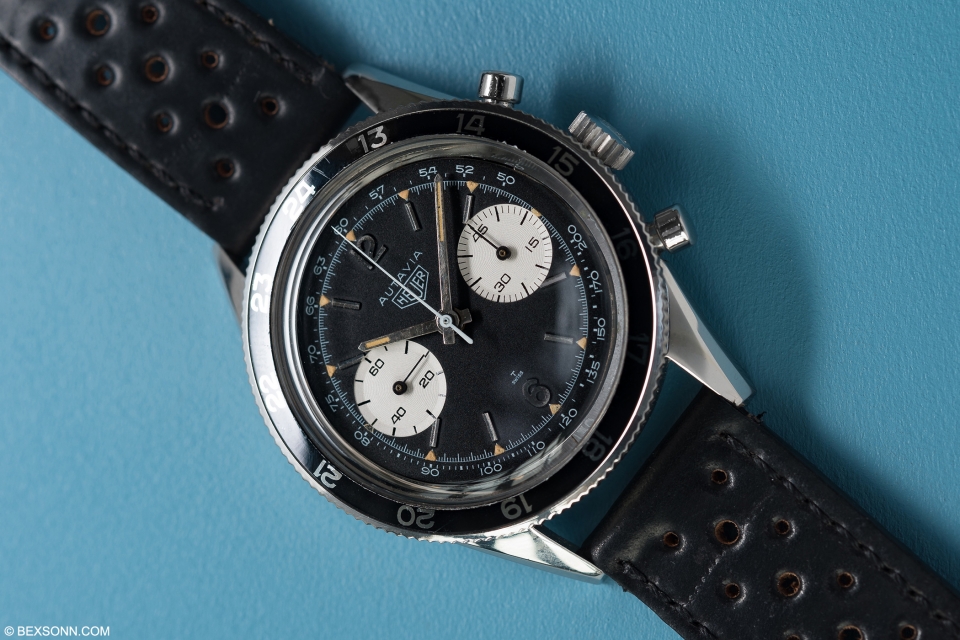 Now that summer is in full bloom, there are of course some auctions to look forward to. At the beginning of last month, we attended the May Geneva auctions and like we’ve done in the past; we decided to drop by to have a look at some of the pieces that were coming up for auction. As ever, the amiable Eric Wind was our host and while we of course couldn’t resist looking at the very special 2497 that was coming up for auction that weekend, we also had time to snap a few of our favourite lots from the upcoming June New York auction. 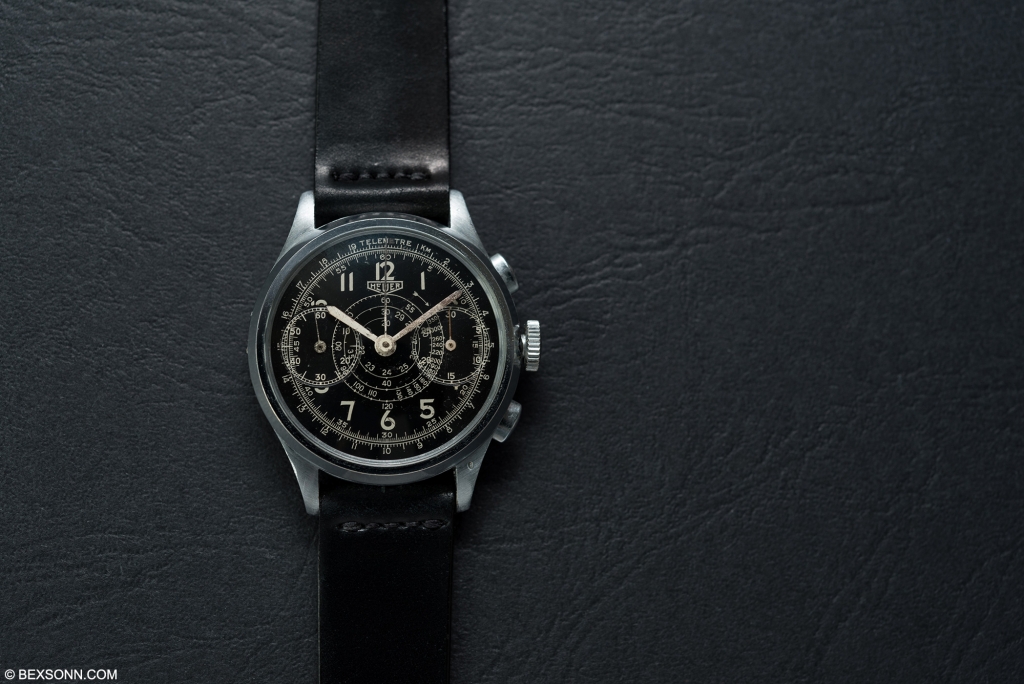 Without trying to sound like a broken record, Heuer chronographs are significantly rising in value but perhaps the examples that are only seeing a steady increase in value are the very, very early chronographs. Chronographs that are pre-Heuer naming range are probably considered a little riskier than say your Autavia’s, Carrera’s, or Monaco for that matter but when all is correct they are absolute gems, like this example you see right here. This, circa 1941, Heuer chronograph with a beautiful black gloss dial would denote that this piece was actually a military issue. It was very common at this time for Military pieces to be ordered with black dials and this very fact has been confirmed. Upon closer inspection, it was clear to see that this example has been well-preserved. The black gloss dial features two subsidiary dials, with an outer telemeter scale and a very appealing inner spiral tachymetre scale. The steel case measures 36mm, but on the top left lug there is a Portuguese import hallmark, which shows where this piece was delivered. The case sports olive pushers at 2 & 4 o’clock, either side of the large winding crown. It is presented on a black leather strap that is very fitting, making this already rare piece look even more enticing. 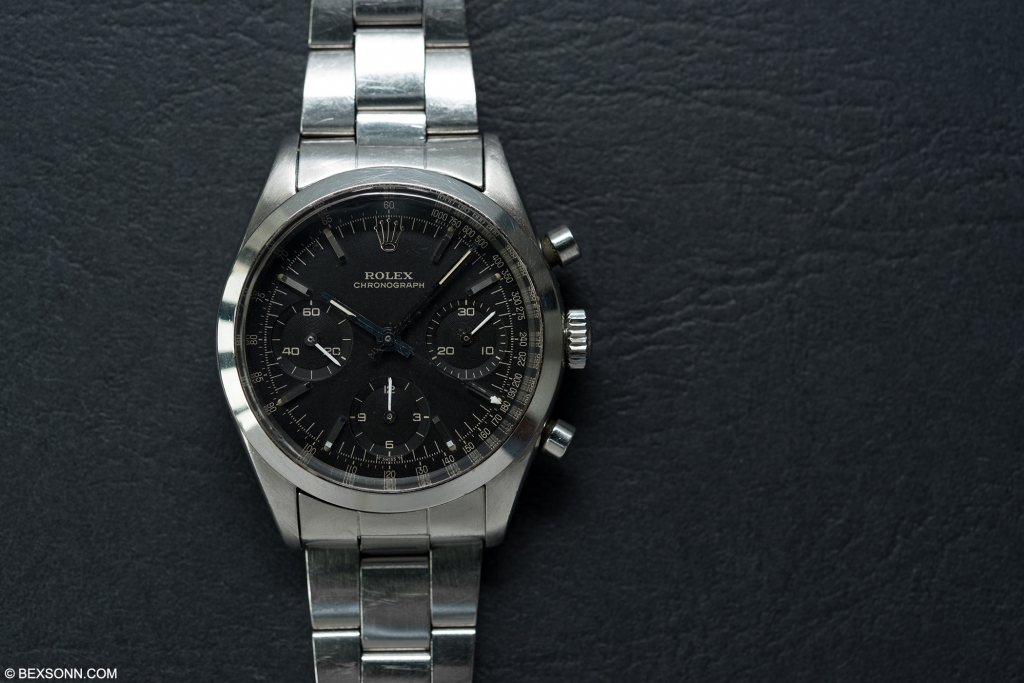 The Rolex ref. 6238 is referred to many collectors as a Pre-Daytona and to be honest, it’s not hard to see why. The ref. 6238 is the direct predecessor to the venerable Cosmograph Daytona, which was in fact the last model to feature a tachymetre scale on the dial and it is quite understandable to consider that without this important reference there would perhaps be no Daytona today. When you look at earlier Rolex chronographs that came before this reference, they were quite obviously more classically styled, however, looking at the 6238 it has a more modern and timeless design. What perhaps stands out on this example, is the fact that it is fitted with the more sought after and rarer matte black dial. Something that has always intrigued me about these pre-Daytonas, is how relatively affordable they are in comparison to the Daytona but popularity has grown and the fact they arguably offer the same kind of sportiness, the 6238 is quickly becoming hot property and even more so for those that sport a black dial. Patek chronographs are just about as cool as it gets but the ref. 1463 can boast that it was indeed the first ever fully waterproof Patek chronograph. When introduced in the early 1940s, the ref. 1463 probably best epitomised the term “toolwatch” in my humble opinion. Easily one of Pateks’ most versatile vintage wristwatches and one of the most attractive too, there is no doubt that when Patek Philippe produced this watch, they had the active bon vivant clientele in mind. Produced in stainless steel, yellow-gold and pink gold the 1463’s masculine case proportions, just screams sporty elegance but with restraint. While there are many different dial variations (my personal favourite being those that feature a Breguet numeral dial), you’ll notice this example bears a co-signature at 6 o’clock. Retailed by Hausmann & Co., founded in Rome, Italy back in the 1794 by one Ernst Hausmann (a young German watchmaker) and his partner, Hermann Frielingsdorf. Interestingly enough Hausmann & Co., still resides in the same premises in Rome. 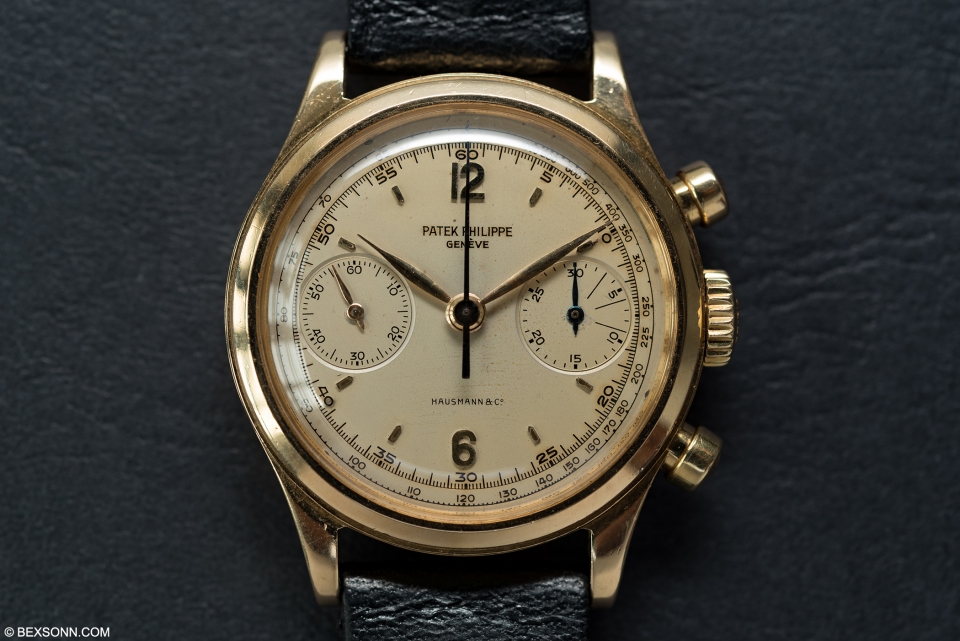 That said, the dial bears signs of ageing with numerals at 12 & 6 o’clock and a very thin outer tachymetre scale, giving the dial a nice clean look. The case is in exceptional condition, with its strong lines still present. The Autavia is arguably Heuer’s most appealing, attractive and elegant chronograph of their famous three. There is a likeable quality to it that perhaps is lacking in the others, maybe this is the reason why their popularity and of course value have skyrocketed over the past few years. That said, what makes this example more appealing than all others that we’ve seen to date is the inclusion of a tachymetre scale on the outer edge of the minute track. 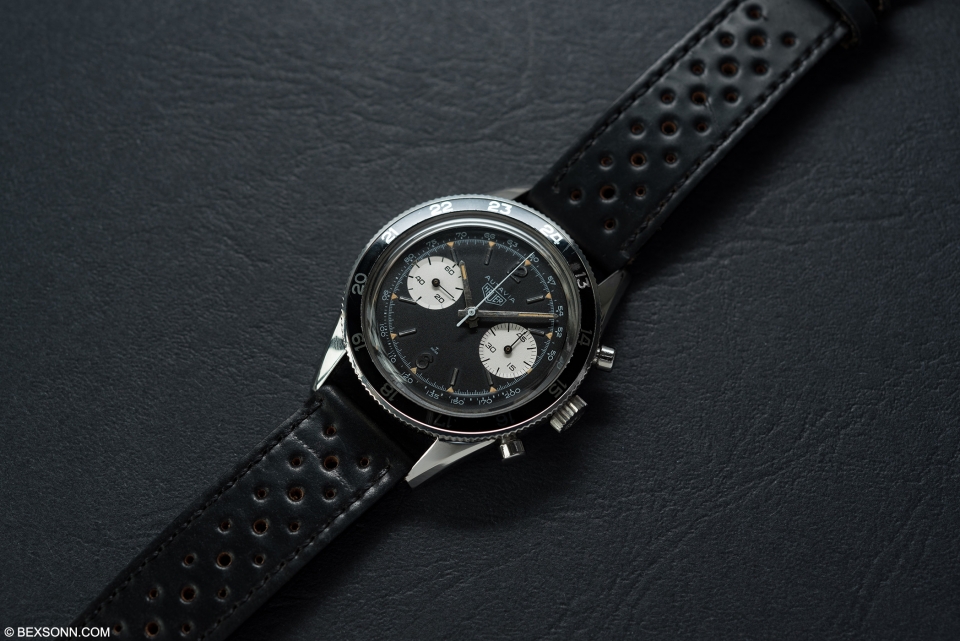 The dial features applied steel markers, which includes the Arabic numerals at 12 and 6 o’clock. Moreover, this 3rd execution dial includes lume plots that appear to form a triangle, with this combination giving the dial a unique look. Only a small handful of these dials are known to exist and it is suspected that these dials were special order only, thus proving to be extremely rare amongst collectors and as such, only four are known in existence.

Another noticeable trait that this 3646 sports is a bezel that has 13-24 demarcated on it, for easy use of reading international time in the afternoon. Again, only very few of these bezels are known to exist in the vintage Heuer market. Okay, so the 3646 Autavia before this was pretty downright cool but this piece is perhaps as rare as they come. Over the past few years we’ve had the privilege to handle and shoot some very interesting Heuer’s but admittedly, we weren’t ready for this piece. What do I mean? In pictures, it is rather unassuming and even when you see it in the metal, it still not apparent – that is until you hold it in your hands. This is an extremely rare Heuer Autavia 3646 with Indianapolis Speedway Logo dial, it is said there is a very finite number of examples known with a dial such as this, in fact only two were known in the market prior to this example. One is known to reside in the TAG Heuer museum and the other example is in the collection of an important American collector. This rare 3646 features an unusual, striking, albino dial that adds a certain sparseness to the dial, otherwise seen on your normal run-of-the-mill panda dial 3646 – something not too dissimilar as the albino Daytona 6239 that we covered here. That said, there is another minute quirk that could easily go unnoticed. The central minute chronograph hand doesn’t quite reach the outer minute track, a detail perhaps missed when at the time of production but of course in the realm of vintage watches, this only adds to its rarity and authenticity. This example is completely fresh to the market and certainly does offer Heuer collectors the chance to own a rare piece with serious wow-factor to their collection.

Christie’s New York up and coming auction, truly has some rare and iconic watches, many that will no doubt have buyers reaching for their paddles. With so many rare Heuer’s in the offering, you could be mistaken for thinking that Christie’s have just jumped on the success of how well Heuer’s are performing at auction. But look again and you’ll notice each piece that has been selected is very special indeed. I have no doubt that just like the vintage pieces in Geneva and Hong Kong, they will meet expectations.

For more lot information on Christie’s Rare Watches & American Icons New York auction that will take place on the 21st of June, at the Rockefeller Plaza, New York, visit the official Christie’s website to view the entire catalogue.