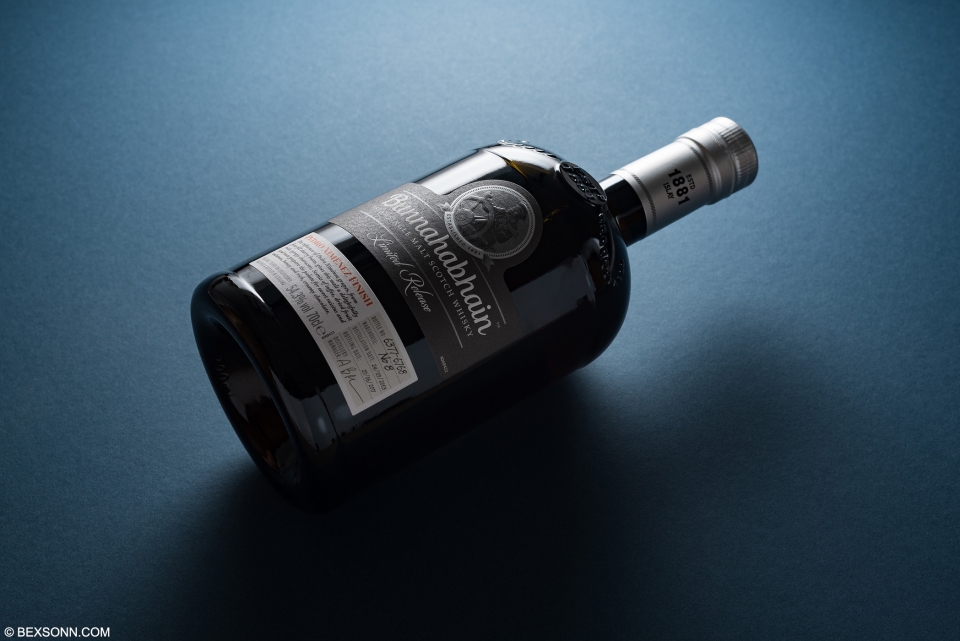 Bunnahabhain has been part of the island’s (Islay) history since 1881, located in a village on the northeast coast of the isle of Islay, which is in the Argyll and Bute area of Scotland. Pronounced Bu-na-ha-venn, their whiskies are fondly well-known for their wonderfully gentle and warming taste, which differentiates them from other Islay whiskies. This limited edition single malt from Bunnahabhain distillery spent eleven years in 2nd fill sherry casks following distillation in 2003. In 2014, the liquid was transferred to 1st fill Pedro Ximenez butts for an extra three years maturation. The result is a rich and syrupy Islay single malt, bottled at a cask strength of 54.3% abv, free from chill-filtration and artificial colouring, with each bottle individually numbered.

On the nose: is an intensive waft of sweet, rich mixed fruits (currants) and raisins, toffee apple and a note I can only liken to a slice of red velvet cake. These initial notes are followed by dark chocolate, vanilla, hazelnuts, as well as some spices in the form of star anise. The nose is nicely finished-off with notes of marmalade, marzipan, a hint of lemon zest, maple syrup, a slight musky note and some green herbs. On the palate: those notes of raisins and currants are present, followed by dark chocolate ganache, marzipan and toffee. There is a lovely gentle suggestion of peat in there, alongside notes of marmalade, cinnamon, star anise and cracked black pepper. Rounding-off the palate are notes of maple syrup, candy and a slight leathery note. The finish: is long, peppery, sweet with currants and raisins; notes of hazelnuts and dark chocolate linger on.

The verdict: I believe this is first time we’ve tried one of Bunnahabhain’s limited releases and we were definitely not disappointed. It’s so rich, with an absolutely moreish nose and palate that just keeps giving more. With an ABV of only 54.3%, in my humble opinion this is a dram that definitely requires a little water, just to soften it up a bit. Leaving it to breathe does release a few extra notes but also intensifies its spicy side.

For more information on this limited release expression, visit the official Bunnahabhain website.