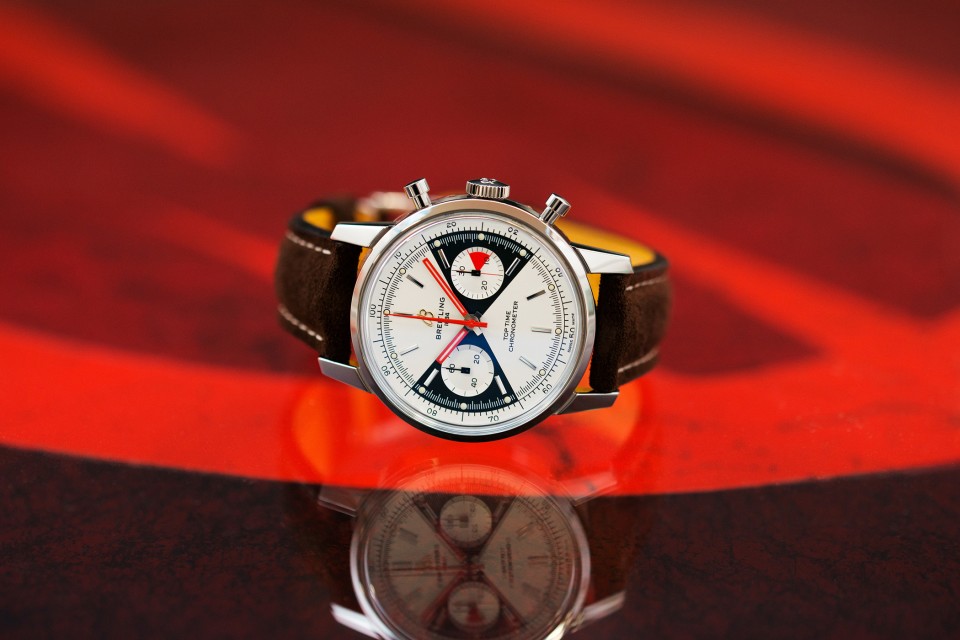 Breitling have been under new ownership and management for a good couple of years now, with ex-IWC CEO, Georges Kern at the helm. This is indeed a new era for Breitling and they’ve made no hesitations in being quick off the mark. During our Baselworld meeting a couple of years ago, it was clear to see that the task facing them was identity. Something they also needed to get to grips with sharpish was reducing the size of the current catalogue of watches. The best way? Introduce new pieces and discontinue out dated models – a feat which is currently ongoing. While some of their new releases have been greeted with much scepticism, this latest addition seems to have appeased the masses.

The Top Time model of wristwatches was introduced by Breitling in 1964 to appeal to a younger audience. They were robust timepieces able to withstand active lifestyles and priced at a much lower point than Breitling’s other chronographs. Over time, they became an icon also thanks to the many celebrities who donned them. Most notably, a Top Time (ref. 2002) is one of only two watches worn by Sean Connery/James Bond (the other being of course the Rolex Submariner) and the first Q-modified timepiece to ever appear in the movie series (specifically, in Thunderbird). This latest release is based on the rather noticeably fun “Zorro or Bowtie” dial variation. The design of the dial is rather unique to the brand and it’s something that first cropped up on 1940s Chronomats. Years later this dial motif made its way to the Top Timer and was even used in the Sprint model.

The Top Time Limited Edition Re-Edition is the brand’s third historical re-edition and Breitling have faithfully recreated this legendary timepiece. This new limited edition re-edition has been created with attention to every detail of the original “Zorro” Top Time design. Like its inspirational predecessor, it has an all-white dial with tone-on-tone sub dials and includes one of the signature elements of the original “Zorro” Top Time, the dial is adorned with its smart bowtie.

The Top Time Re-Edition features red hour and minute hands as well as the dot markers for each hour are coated with Super-LumiNova, a luminescent material that ensures legibility in all lighting conditions. Along with the central hour, minute, and chronograph second hands, the dial also features a decimal scale and two sub-dials – a small second counter at the 9 o’clock position and a 30-minute counter with unique red accents at 3 o’clock.

Furthermore, the stainless-steel case measures precisely 41mm, some 2mm larger than its inspiration. While 41mm does sound a little on the large side, let’s not forget this is quite a reasonable size and is within the region of the Speedmaster. The Breitling Top Time Re-Edition comes fixed on a brown nubuck vintage-inspired leather strap with a pin buckle.

Unlike the previous re-edition of the 765 AVI which housed a manual-wound movement, inside the Top Time re-edition is the Calibre 23 self-winding chronograph movement, which is based on a heavily modified Valjoux calibre 7753, which offers 48-hours of power reserve. Though, what is rather nice to see is that Breitling have omitted the date and, in all honesty, have kind of kept a tradition alive in this new re-edition by making use of a third-party movement, something owners and collectors of original Top Time watches are well aware of.

This is the third re-edition from Breitling in the past year or so and it would appear they are on a bit of a roll. This new addition will of course please many Breitling aficionados alike and kudos to Breitling themselves for releasing this new, fun, re-edition in such uncertain times. That said, it’s important to note that Breitling have kept the look of the Top Time as pure as possible and I’m sure followers of the brand will appreciate this, though it will be good to see how the 41mm case translates in the metal – if and when possible, so I’ll reserve my full judgement until then.