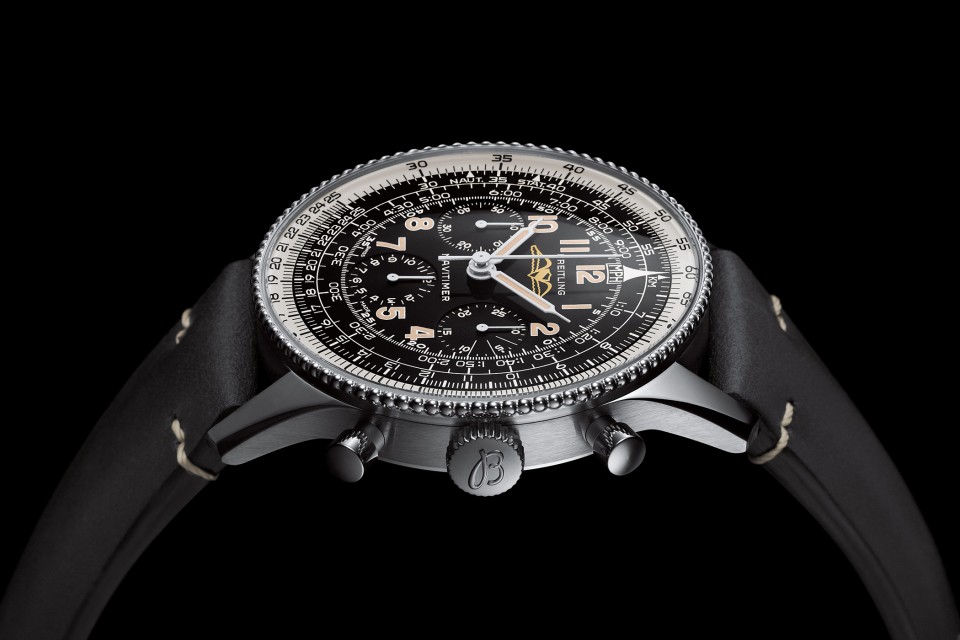 This is a new era for Breitling and they’ve definitely not taken too long to find their new direction. During our Baselworld meeting last year, it was clear to see that the task that was facing them is identity. Something they needed to get to grips with sharpish was reducing the size of the current catalogue of watches. The best way? Introduce new pieces and discontinue out dated models – something which is currently ongoing. While some of their new releases have been greeted with some scepticism, this latest addition has been greeted with applause all round!

The story of the first Navitimers are shrouded in mystery and even a bit of controversy. You see the problem is, no-one quite knows for certain the full story, or if they do, they have not yet spoken about it. The records held by Breitling SA in Grenchen, Switzerland are incomplete, so to tell the story of the most famous Breitling in itself involves detective work and to a certain extent speculation; even the foremost world experts on vintage Breitlings cannot agree on all details. What is certain is that following the great success of the Chronomat, the world’s first slide rule chronograph released in the early 1940’s, proved to be invaluable as it enabled the pilot to make speed, distance and fuel-consumption calculations.

The name ‘Navitimer’ is actually a combination of the words Navigation & Timer, since the watch was originally developed as a navigation watch for pilots, who could use the slide rule to calculate remaining distances, fuel consumption etc. Breitling in association with AOPA (Aircraft Owners & Pilots Association) made a second slide rule chronograph and released it at some point between 1952 (which is claimed by Breitling) and 1954 (which is believed to be the correct period of release according to Breitling experts). The first Navitimer was born with AOPA’s official wing logo displayed on the dial. The thing is, the actual start of production of the Navitimer will remain a mystery as many of Breitling’s early records were lost.

It has been a long time coming but finally, Breitling have faithfully recreated the iconic Navitimer and the attention to detail is second to none. This new limited edition re-edition has been created with attention to every detail of the 1959 Navitimer design. Like its inspirational predecessor, it has an all-black dial with tone-on-tone sub dials and, recreating one of the signature elements of the original Ref. 806 in 1959, the dial is adorned with a Breitling inscription in capital letters and an unsigned winged logo. Furthermore, it is a little-known fact is that the unsigned winged logo was used for the European market, while the watches sold in the US had an AOPA-signed logo.

Any Breitling aficionado will know all about the intricacies of the Navitimer beaded bezel and even here Breitling haven’t skimped. The rotating beaded bezel made of precisely 94 beads, exactly the number found on the 1959 model. In the course of the production period for the original Navitimer Ref. 806, the number of these beads varied from as many as 125 in the early 1950s to as few as 93 in 1960. This may be a small detail, but for enthusiasts of historical wristwatches, this will not go unnoticed.

Furthermore, the stainless-steel case, measures precisely 40.9 millimetres, which has been developed specifically for this watch, with the same dimensions and finish as the original ref. 806. The watch comes on a black vintage-inspired leather strap. The famous circular slide rule, though this sits beneath a piece of high-domed acrylic glass, fashioned in exactly the same shape as the original but it will be interesting to see how this translates in person.

Of course, being a modern watch there are aspects in which it differs from its iconic predecessor. Its waterproofness has been increased to 30 meters, and Super-LumiNova has been used where required. However, like many manufacturers, Breitling have taken the liberty of adding some faux-patina to the lume to ensure it remains faithful to the luminescent material on earlier watches. Its hand-finished application gives the dial an additional touch of vintage allure and character. Perhaps one of the most important details of this re-edition has to be the chronograph movement and I say this because Breitling only have automatic-winding chronographs in their armour. That said, in respect to the original manual calibre that powered the early Navitimer, a completely new hand- wound movement has been developed. The in-house Breitling Manufacture Calibre B09 mechanical movement is based on the brand’s renowned in-house Manufacture Calibre 01 and is a COSC-certified chrono meter. This movement will power many of the other hand-wound historical re-editions to come.