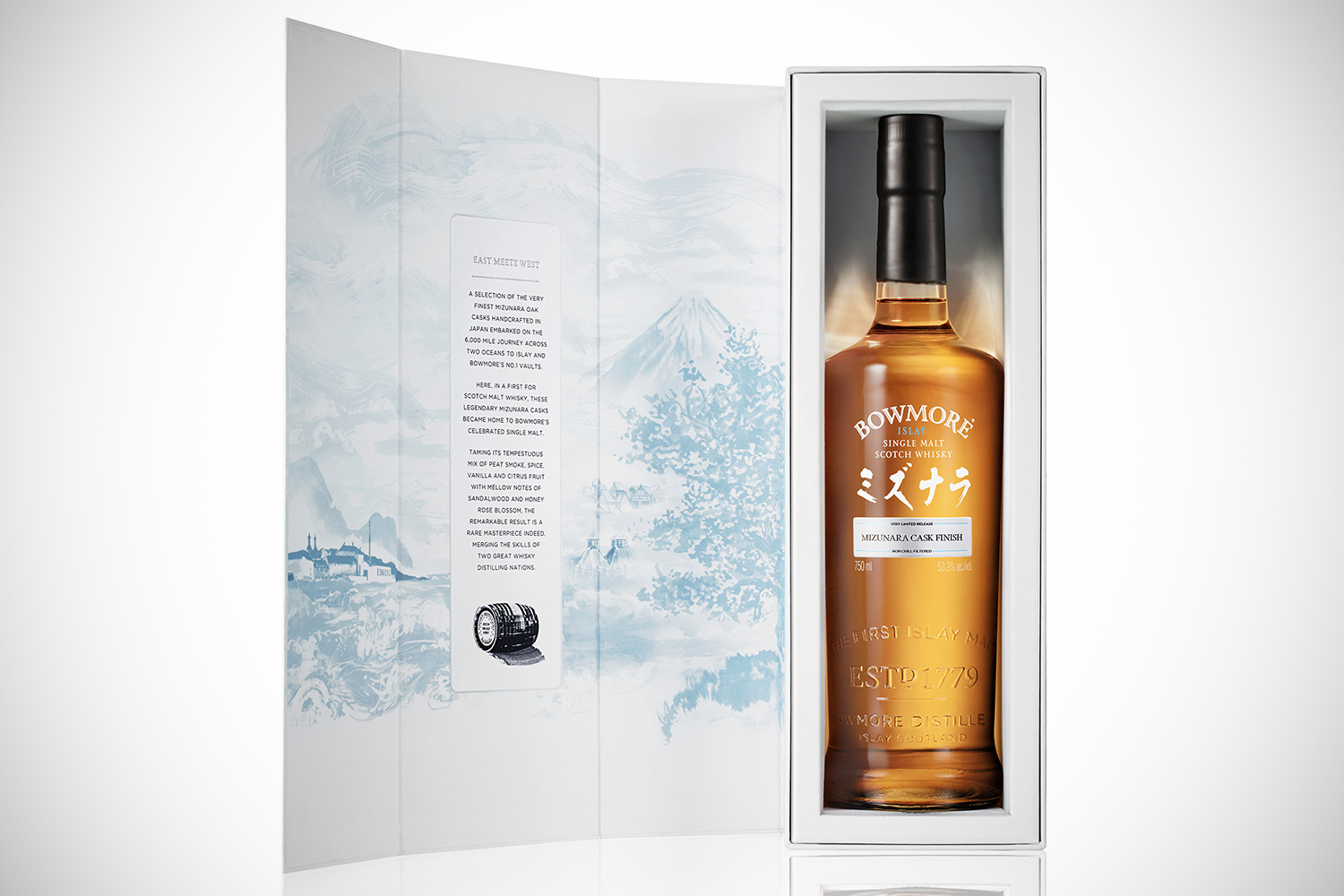 Bowmore Mizunara Cask Finish: Just last week I wrote some tasting notes on Bowmore’s 10-year-old Tempest Small Batch Release Scotch. This week we have a dram from the same distillery but this time there is a massive twist. Last week Bowmore contacted me in regards to a new release of Bowmore that has never been seen in the industry before. Strangely enough a couple of dram partners and I were talking about who would be the first to release a Scotch aged in Mizunara casks and the conclusion was that if it were anybody, it would be Bowmore first. Last week Monday morning a Himitsu Bako puzzle box showed up on my desk and after a few slides of the concealed panels, sitting inside was this tasty and rare dram to be sampled. Billed by Bowmore as East Meets West, a selection of the very finest Mizunara oak casks made a 6000 mile journey from Japan to Islay, to create a very intriguing marriage of Scotch, with the elegance and refinement of Japanese whisky.

On the nose: is intensively spicy, with notes of an inky nature (this will be the Mizunara cask), honey and the strangest note liken to a hint of Kipper. Sweet fruitful notes of apricots start to emerge, followed by cinnamon, vanilla, a light kiss of peat and a light waft of lavender. More notes in the form of roasted almonds, cedar wood and cantaloupe melon appear. On the palate: those spicy notes on the nose are confirmed on the palate, followed by fennel seed, almonds and hazelnuts. After  few swirls in the glass notes of a coffee nature start to emerge, followed by a hint of jasmine tea and honey. Notes of peat never really emerge nor disappear but are more a lovely constant balance, along side oak, tanginess, green herbs and a touch of sea salt. The finish: is long, spicy, dry, with lingering peat and oak.

The verdict: Bowmore have a very distinct Islay Scotch and this marriage in a Mizunara cask is a masterstroke. Its Bruttish Islay character is evident but it has a very endearing delicate touch of Japanese elegance, which of course comes from the Mizunara cask. I’m a massive fan of Japanese whisky finished in Mizunara casks and a lover of Islay Scotch and this dram is a brilliant matrimony. With an ABV of 53.9%, this is likely a Scotch you’ll want to add a few drops of water to but not too much, as this will unsettle the balance of this dram.

For more information on the Mizunara Cask Finish, visit the official Bowmore website.