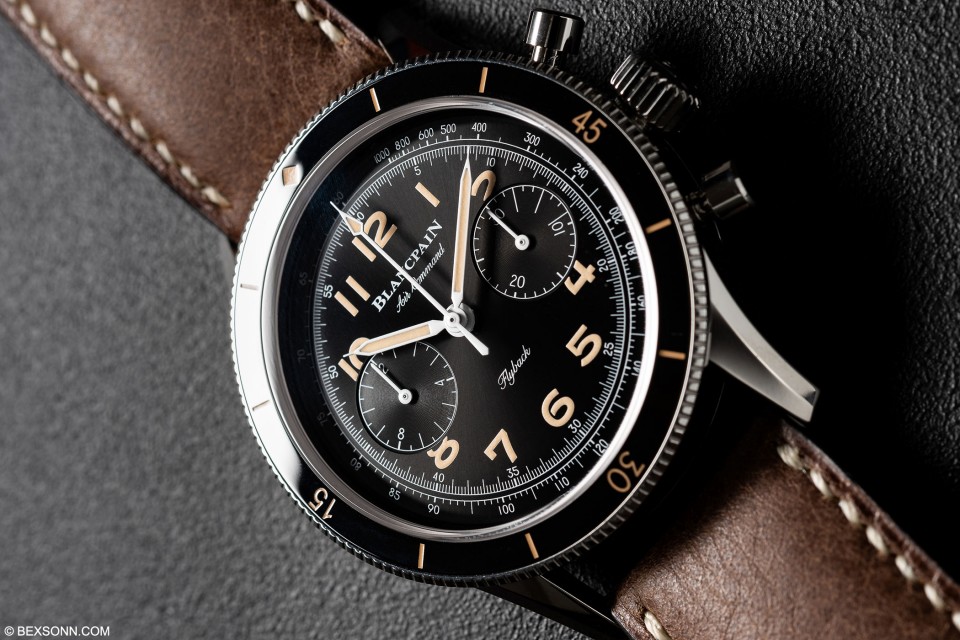 The trend of re-editions is vogue these days, however, this is something Blancpain have been doing for some time- I guess you could say they’ve been ahead of the game for quite a while. The Fifty Fathoms has been part of the Blancpain range for many years; based on the original 1953 first full-purpose legendary dive watch. In 2019, Blancpain re-introduced another one of their past legends: the Air Command. The Air Command chronograph belongs to the select circle of legendary watches, so rare that collectors salivate at the mere mention of one. While its creation remains something of a mystery and has generated a variety of stories, its military vocation is a certainty. Considered superior to that of other timepieces of this ilk, while its design shares similarities to the Type XX it is unmistakably Blancpain.

As you may be well aware, in the early 1950s, the French Ministry of Defence was looking for a high-precision chronograph capable of meeting demanding specifications. The watch to be selected had to have a black dial with luminous hour-markers and hands to maximise legibility. The movement needed to be equipped with flyback function, as well as a small seconds hand. A few years later, other armed forces began looking for a similar instrument. Blancpain, who had already won over the American Navy with its Fifty Fathoms diver’s watch, drew inspiration from it to develop a chronograph for the United States Air Force.

The Air Command is considered to be a military watch; however, this brings with it some amount of controversy. The Fifty Fathoms link with the world’s elite naval diving units is undeniable, though the Air Command’s link to the USAF is somewhat murky. Though in truth this kind of adds to the mystique of this rare timepiece. The story goes that around 12 Air Command watches were produced in the ’50s by Blancpain at the insistence of Allen V. Tornek (Blancpain US importer), which were apparently given to US Air Force pilots. It is possible that after the success with the Fifty Fathoms in the Navy, Tornek thought that he could create a similar functional flyback chronograph not too dissimilar to the Type XX/Bundeswehr-styled pilot’s chronograph. However, lightening didn’t strike twice and unfortunately the Valjoux 222 powered Air Command never took flight (pun intended).

The 2019 edition is a faithful reinterpretation of the original Air Command and because it was intended to be used by pilots it is fitted with a ratcheted “countdown” rotating bezel. The time scale of the bezel, as well as the dial hour-markers and hands, are made of “old radium” type Super-LumiNova, reproducing the orange hue of the original chronograph indications. The model bears a 30-minute totalizer at 3 o’clock and a 12-hour counter at 9 o’clock, while a tachymeter scale running around the chapter ring indicates speeds based on a 1000-metre distance.

To enhance the legibility of the information and to add a bit of distinction to this limited piece, Blancpain has improved the dial opening compared to the original model. The dial of the new Air Command is protected by a sapphire box-type crystal, a distinctive characteristic of the watches from this period that also appears on the back of the watch; thus revealing the snailed movement notably graced with a contrasting propeller-shaped red gold oscillating weight.

Housed in this 42.5mm steel case is the new F388B calibre, which has been endowed with a high frequency of 5 Hz. This high frequency ensures greater accuracy, especially when timing events. Another feature of the F388B movement is a vertical clutch that provides the chronograph seconds hand with a smooth start, as well as optimally seamless stop and start functions. It has a column-wheel system, which remains the exclusive preserve of high-end chronographs, particularly because it gives a velvety feel when starting or finishing a measurement and returning the hands to zero. The flyback function enables instantaneous zero-resetting and restarting.

The 2019 Air Command is a faithful reinterpretation of a legendary timepiece, albeit one with a bit of a questionable past. This is perhaps a watch nobody saw coming from Blancpain but it has been warmly welcomed. As already mentioned, the Air Command was never serially produced but this limited edition offers collectors the opportunity to own a slice of Blancpain history in a more contemporary setting. While Blancpain have added many modern updates over the original piece, such as the black sunburst dial and ceramic bezel, the use of vintage faux patina does lend something to the overall look and charm of this timepiece. While some may bemoan the use of a red gold propeller for the oscillating weight of the automatic movement, as jet engines were pretty much the norm when this piece would’ve been originally released, it does add a touch of harmless fun to an otherwise mundane looking chronograph calibre. Perhaps it would’ve been nice to see the use of domed crystal, something often used these days on many vintage-inspired watches that I think would’ve given it more character. Nonetheless, you’ve got to hand it to Blancpain for not including a date window; a detail too often watch brands like to add.

This new Blancpain Air Command Flyback Chronograph is limited to 500 pieces and priced at CHF 18,500. For more information, visit the Blancpain website.