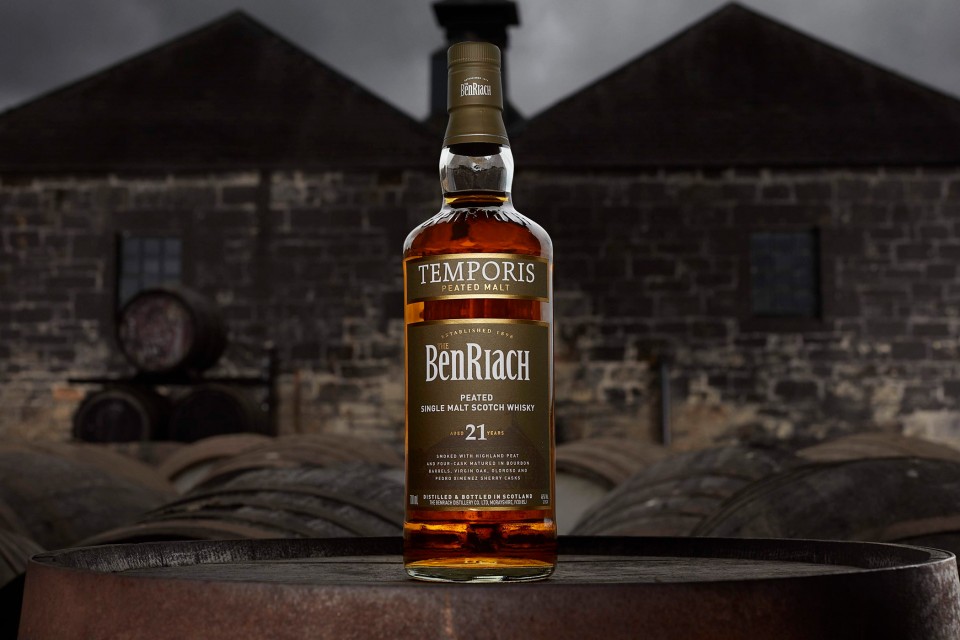 Historical whisky research indicates BenRiach was the first distillery within Speyside to re-introduce peated malt into its whisky making back in the 1970’s, a time when most Speyside distillers had moved their focus towards unpeated malt distillation. It is in this spirit that BenRiach Distillery is delighted to showcase its pioneering peated Speyside heritage by releasing BenRiach Temporis Aged 21 Years, the latest addition to the award-winning BenRiach peated range, winning a Silver Outstanding Medal at The International Wine and Spirits Competition 2017 and a Silver Medal at San Francisco World Spirits Competition 2018.

On the nose: you’ll experience sweet notes of vibrant rich currants, followed by cinnamon, orange peel and a suggestion of smoke. These initial notes are closely followed by treacle, toffee, pear drops, vanilla, candy and zest. Rounding-off the nose are notes of strawberries, cardamom, green herbs, turmeric, ginger, oak and honey. The palate: delivers the all-expected peatiness, which is nicely followed by those rich currants, as well as a velvety creamy texture, poached pears and honey. Notes of apples start to emerge, followed by dark chocolate, spices, cinnamon, nutmeg and ginger. Completing the palate are notes of tropical nature, star anise and mint. The finish: is long, creamy and smoky, with lingering notes of spices, aniseed and oak.

The verdict: I’m a great admirer of BenRiach and even more so of what Master Blender, Rachel Barrie is doing at both BenRiach and GlenDronach. The nose and palate of the Temporis has a  peaty nature but of course has tonnes of fruity, light, elegant notes that I find are well-balanced. With an ABV of 46%, in my opinion is doesn’t really need any water but do so if this is how you prefer your scotch. This 21-year-old Temporis is a drop that should be savoured with every sip.

This BenRiach Temporis Year Old Single Malt Scotch Whisky can be found in any well-stocked whisky shop for approximately £135.