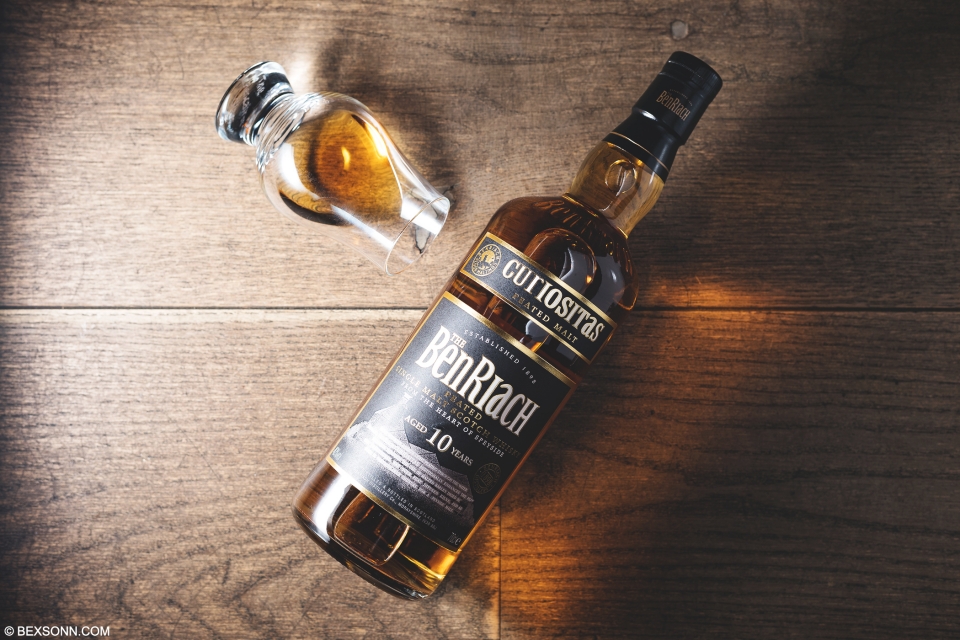 The BenRiach distillery has a much checkered past but now under the guidance of the one industries leading whisky experts, Billy Walker,  it is once again thriving. Built in 1897, by the then owner John Duff, the BenRiach distillery owes a lot of its previous fortunes to its larger and more famous neighbour: Longmorn. However, by 1900 after running into some financial difficulties it was mothballed but still continued to supply its neighbouring distillery. While it was resurrected in 1965 and changed ownership a few times after this, it once again suffered mothballing in the early 2000s. In 2004 it was bought by a consortium, led by Billy Walker and I guess you could say the rest is history. BenRiach are very well-known for their sweet and punchy sherry notes, which they call the sherry bomb. However, this 10 year-old Curiositas is one from their Peated range, which still offers much in the way of fruity notes.

On the nose: you’ll experience sweet notes of fresh green apples, honey, vanilla, peppery notes and smoke. This is closely followed by hints of  lavender, mixed fruits, cinnamon and all-spice. The nose is nicely rounded off by a musky note, hints of lemon zest and pear drops. On the palate: it packs a peaty punch, followed by those mixed fruit notes, vanilla, honey and warm butterscotch. Notes of toffee, coffee and of a more medicinal nature start to appear, alongside notes of a herbaceous nature, nuts, pepper and toasted oats. The finish: is long, dry, peaty, with lingering spices and oak.

The verdict: I’ve never really posted any tasting notes on BenRiach before but I have sampled it many times before. I’ve never tasted any of their peated malt expressions either, so naturally I wasn’t sure what to expect because what you need to remember is that a Speyside peated scotch is different to that of an Islay peated scotch. The nose and palate of the Curiositas has a  peaty nature but of course has tonnes of fruity, light, delicate notes that I find are quite nicely balanced. With an ABV of 40%, in my opinion is doesn’t really need any water but do so if this is how you prefer your scotch. The Curiositas is a lovely dram that should be shared with friends.

This BenRiach Curiositas 10 Year Single Malt Scotch Whisky can be found in-store or online at The Whisky Shop for approximately £40.