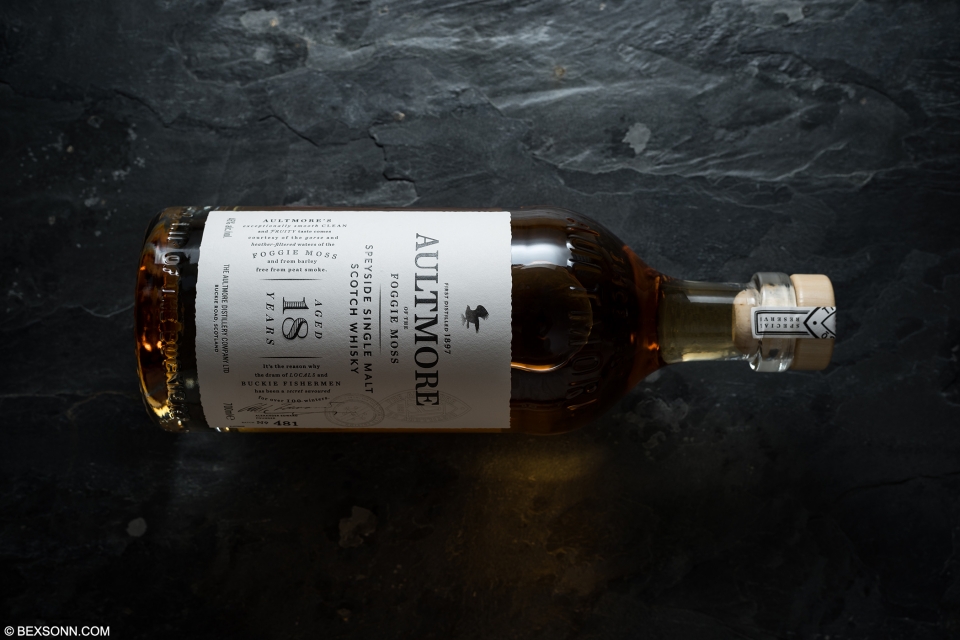 Before the end of last year we looked at an 19-year-old exclusive bottling of Aultmore and suffice to say we were very impressed. We’ve also sampled the Aultmore 12yo, 21yo and 25yo but now we shall have a look at an expression that sits somewhere amongst these expression; the 18-year-old. As mentioned before Aultmore is often used to go into blends. There have been some independent bottlings and just a few days ago I even sampled a much younger version of what has been officially released but we’ll leave that to another time. If you’ve read my previous tasting notes on Aultmore, then you’ll know that it is a single malt, which is exceptionally smooth with a clean, grassy, fruity taste, which can be traced to the abundant springs of the neighbouring Foggie Moss.

On the nose: there is a lovely aroma of bananas, dark chocolate and some tropical notes, followed by notes of lemon grass and oatmeal. These initial notes are closely followed by coconut, vanilla, fudge, butterscotch and an interesting tangy note. The nose is nicely rounded-off by green herbs, ginger, lavender, cinnamon, pineapple and figs. On the palate: you’ll experience those banana notes, as well as toffee, brown sugar, honey and butterscotch. Notes in the form of shortbread start to appear, alongside notes of cinnamon, ginger, and tobacco. The palate is complete with faint notes of chocolate, marmalade and a welcomed meaty note. The finish: is long, sweet with toffee, subtle spices and lingering nuttiness.

The verdict: This Aultmore 18-year-old has some consistently, beautifully balanced notes that just keep offering more with every sip. In my opinion the 18-year-old is the best expression from the Aultmore range – period. Bottled at an ABV of 46%, this is a sip of liquid gold that, in my opinion, can be enjoyed how you please, though a drop of water does open it up just that little bit more.