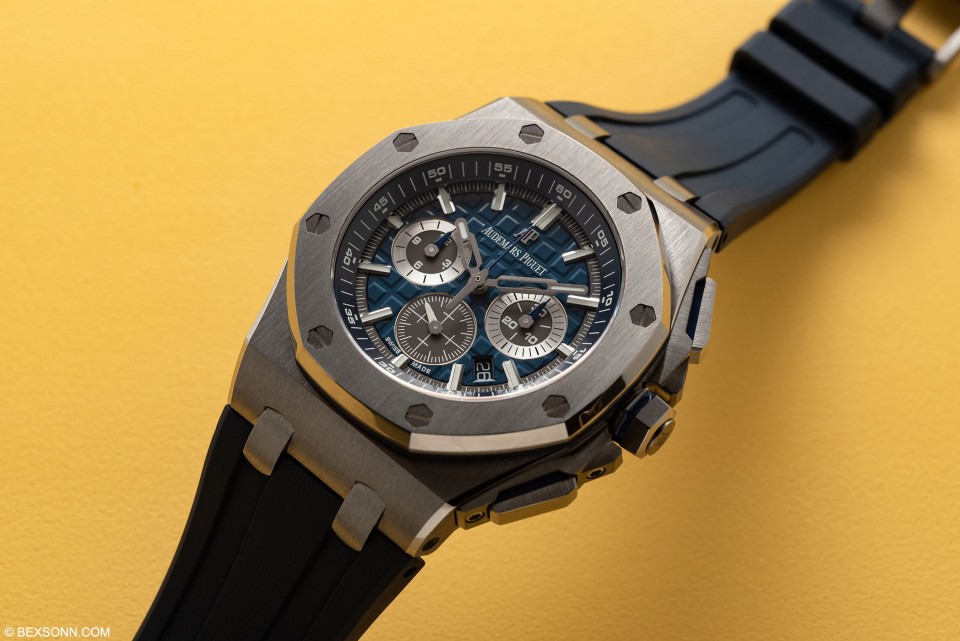 For the past few years either Sean or I have succumbed to the Royal Oak Offshore, in its many guises, seems to captivate one of us – for better or worse. This year Audemars Piguet, introduced the new Royal Oak Offshore chronograph, in a 42mm Titanium case that sports a rather more restraint and modest appearance. That said, make no mistake it is still as bold, brutish and yet somehow, I love it! This is perhaps a piece that AP kind of glossed over this year, in an effort to make sure the CODE 11:59 was the topic of conversation and in all honesty it kind of was, for all sorts of reasons.

As already mentioned, the titanium case measures a rather large 42mm in diameter with a thickness of 12.8mm, it certainly isn’t a dainty piece of wrist wear but understandably it is a dive watch. However, it is somewhat thinner than the more traditional Offshore that is some 2mm plus larger. As with diving, visibility is paramount, which explains the use of contrasting yet sensible tones. The blue “Méga Tappiserie” dial, contrasting thick white-gold applied hour markers and skeletonised baton hands, certainly allows for maximum readability, whether in a dark room or in the ocean. The use of blue for the minute track contrasts nicely against the grey sub dials.

As for the sub dials, the hour and minute totalizers feature a circular grained outer rim, which contrasts well with the entire watch case. While the sub dial register hands feature the hexagonal Royal Oak shape as the centre pinions. Pinned in between 4 & 5 o’clock is the date window; though essential does make the dial look a little cluttered. The rubber strap is nothing less than what you’d expect from a manufacture like Audemars Piguet and the choice of blue is a nice touch, adding an element of ruggedness. It also comes with an additional white strap too, though I think a grey strap as of choice would’ve been nice too.

The movement housed inside this Offshore Diver Chronograph is the Calibre 2385, a movement used for all of AP’s smaller self-winding chronographs, which has quite the legendary status. The AP 2385 is technically the F. Piguet calibre 1185, which is used by quite a few brands and for good reason too. It is an incredibly thin movement, with high-end technical traits, such as vertical clutch and column-wheel. The 1185 is a great fully integrated chronograph movement, hence its slight build that makes it a perfect match for the 42mm case. While the 2385 (F. Piguet 1185) isn’t an in-house movement, you have to commend AP for utilising it. The actuation has a nice tactile feedback and with a vertical clutch, you’ll experience very little chrono-skip on the start and stop.

There are certain things that watch brands do that leave collectors alike somewhat perplexed and this could easily be one of those pieces. It’s big and bold and yet somehow Audemars Piguet have managed to make this new ROO Chronograph still look refined. The thoughtful use of colours and minute details make this, 100m water-resistant, divers chronograph a little bit special in my humble opinion.

On the wrist this new Offshore 26480TI is an absolute pleasure to wear, its titanium case naturally mitigates the watches overall hefty look and while it measures just 42mm in diameter, it still feels a little larger than its numbers suggest. That said, you soon get used to it and its rather restraint design makes it more versatile – though its 12.8mm thick case does make it little troublesome to tuck under your shirt sleeve.

As mentioned, the actuation of the chronograph is a rather smooth affair, and the fact that every single exterior component is fashioned out of titanium, lends a lightness to the whole operation. Admittedly, it’s the little details that make this Offshore quite special and Audemars choice to add a touch of blue to the side of the chronographs push pieces and crown, are the ones that add a touch of class to an otherwise rugged watch. All-in-all, it’s nice to see the Offshore in a smarter, smaller and lightweight package that bridges the gap between pure ruggedness and sophistication.

The new Royal Oak Offshore Chronograph, as mentioned, is only available in titanium and comes on a blue rubber strap, with an additional white strap and is priced at £26,200. For more information, visit the Audemars Piguet website.