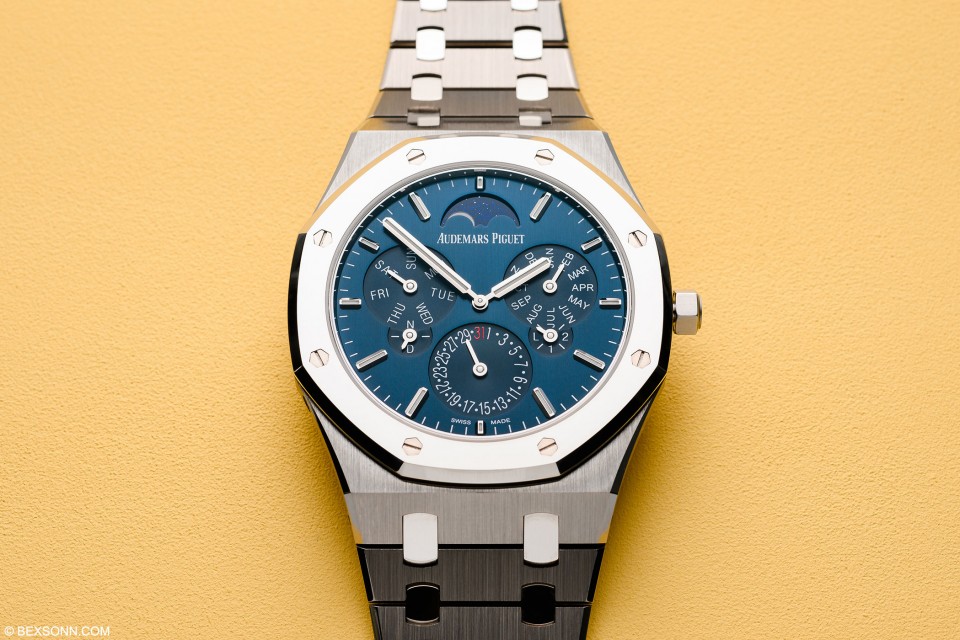 Two years ago, Audemars Piguet introduced perhaps the most intriguing prototype timepiece that was not only jaw droppingly gorgeous but technically mind boggling. Creating an ultra-thin watch requires technical nous and is on par with creating some of the world’s most intricate complications, i.e. split-second chronographs and minute repeaters. Though in theory the task is to make everything thinner, this of course introduces other problems, as tolerances for certain mechanical parts start to wane and become more delicate. That said, last year – the new AP Royal Oak Self-winding Perpetual Calendar Ultra-Thin went from prototype to reality and in the process seduced many enthusiasts and collectors alike. 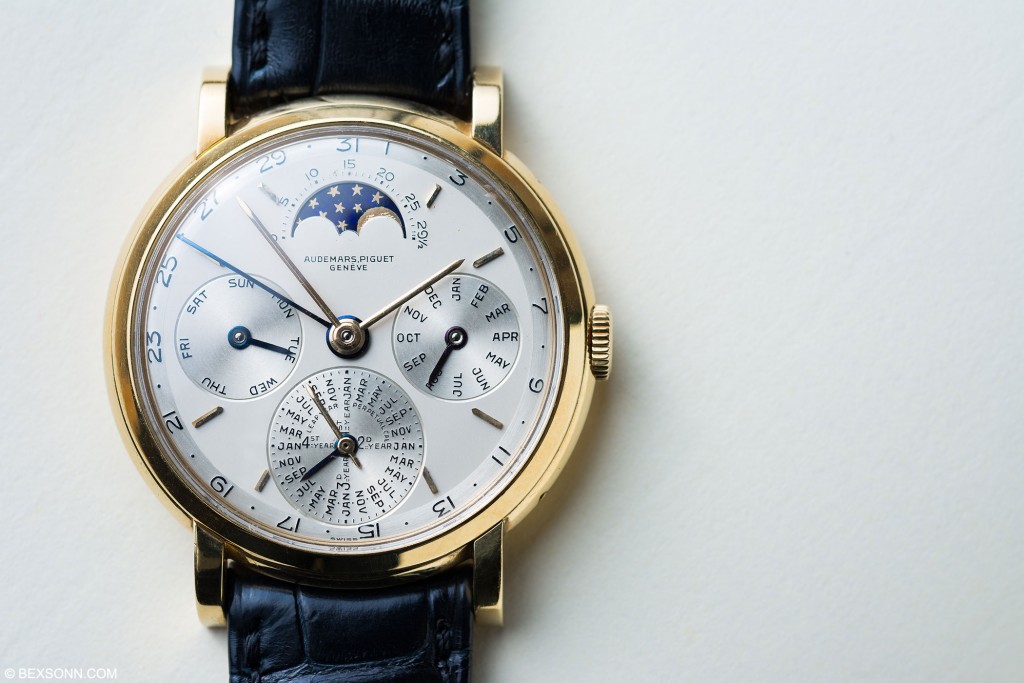 Audemars Piguet have a longstanding history when it comes to perpetual calendars. In 1955, AP produced the first perpetual calendar wristwatch with a leap year indication: the model 5516 with calibre 13VZSSQP (a seen above). AP also have quite the history in creating ultra-thin watches, one of the proudest being the reference 25643 made in 1986. A tourbillon featuring the calibre 2870, that was until recently the flattest automatic tourbillon in the world at only 4.8mm thick (a record passed to Bvlgari in 2018 when they introduced the automatic Octo Finissimo Tourbillon), which featured a case construction that was revolutionary at the time. However, Audemars have reasserted themselves as experts in the ultra-thin world of watchmaking with this new self-winding perpetual calendar.

Peering through the back of the specially made titanium and 950 platinum Royal Oak case, you could be forgiven for thinking that you are look at AP’s standard calibre 2120, however, the new calibre 5133 differs greatly in comparison. While a perpetual calendar in a Royal Oak is nothing new – this new release is the thinnest automatic perpetual calendar, not in just any Royal Oak model ever, but the thinnest in the world. It took Audemars Piguet 5 years to develop this and the newly unveiled Calibre 5133, which measures a mere 2.89mm.

Audemars Piguet didn’t half-heartedly approach this new calibre by making use of 2120 and fixing a calendar complication to it, this would essentially be the calibre 5134 and this comes in at 4.31mm thick; this makes use of a classic 3 level QP construction, which is not exactly thin. The goal of Audemars Piguet was to take it as close to a single level as possible and this was a feat that was achieved, as the 5133 takes this 3-layer construction and condenses everything into a single layer. Of course, this means doing things differently and AP have reduced the thickness by placing components into shallow recesses milled out of the dial side of the mainplate but on top of this, have also used the dial as part of the supporting structure for the perpetual calendar inner workings.

The 41mm case of the self-winding Perpetual Calendar Ultra-Thin is quite something; to know that the complicated calibre 5133 movement has been squeezed into such a small frame is quite remarkable. To give you some perspective, the current Royal Oak ‘Jumbo’ Ref. 15202, which is a time only automatic watch and its 8.1mm thick – that’s a whole 1.8mm thicker. This is taking into consideration that the 15202 is already an impressively thin watch! Whereas the likes of Patek Philippe decided to use a micro rotor in their perpetual calendars to make it thinner, it is very impressive what Audemars Piguet have done with a full central rotor.

The RD2 (prototype) came with the usual Royal Oak characteristics, with a very nice blue Grande Tapisserie dial, however, Audemars chose to take a slightly different path with the production example. AP instead opted for a blue satin brushed dial, with blue counters and white gold applied hour markers and hands, topped off with their classic perpetual calendar layout: moonphase at 12 o’clock, with the addition of a day/night indicator just below the day sub dial at 9 o’clock.

It’s nice to see the shift in watchmaking back to a more traditional path. Where in recent times, it has all been about who can make the largest, loudest and most noticeable watch, Audemars Piguet has finally decided to pull the reins in and focus on what watchmaking has been about for a long time. That is of course, pushing the boundaries and trying to create the most complicated movements as thin as possible. That to me is real craftsmanship and skill, anyone can make a big watch as it affords you a lot of space, but to make a movement this thin takes true mastery.

This Royal Oak Perpetual Calendar Ultra-Thin is a remarkable achievement by Audemars Piguet and it serves as a reminder to other watch manufactures just how steeped in history AP’s are when it comes to perpetual calendars. But it also serves as a reminder that AP likes to break the rules and they’ve done just that with this new iteration of perpetual calendar, which from a technical standpoint displays their mastery on said subject. However, it is more than just pure mastery, as the watchmakers at Audemars Piguet have not only made something that is technically sound but have taken traditional watchmaking and turned it into mechanical artwork.

The Audemars Piguet Royal Oak Selfwinding Perpetual Calendar Ultra-Thin: ref 26586IP.OO.124OIP.01 is exclusively available at an AP boutique and is made using a combination of titanium and 950 platinum for the bezel. It is priced at CHF 140,000, for more information visit audemarspiguet.com.