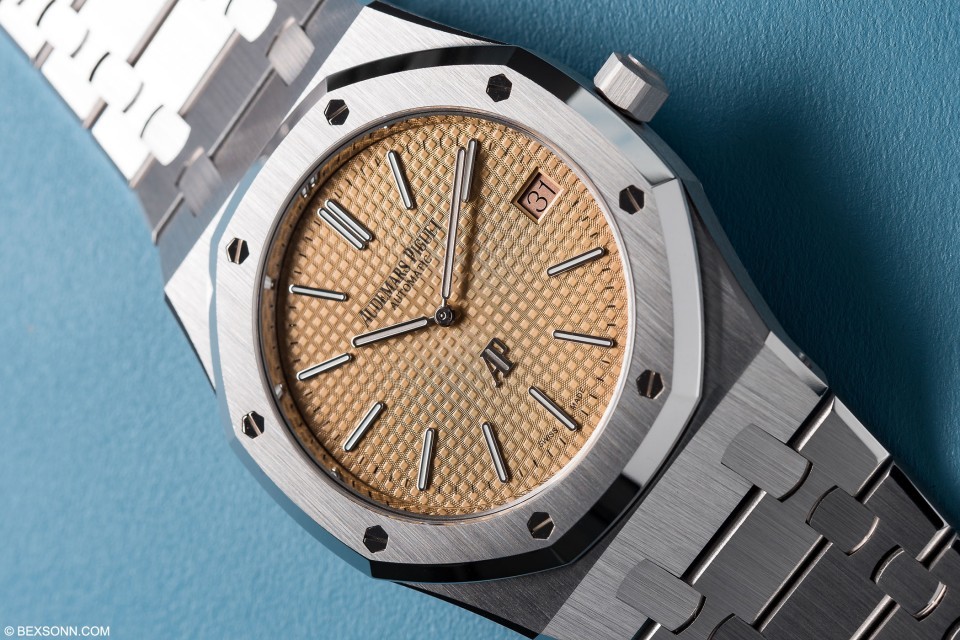 This year marked the birth of the CODE 11:59 for Audemars Piguet, which has received plenty of mixed opinions. While I understand that AP have to look to the future and broaden their horizons, the Royal Oak will always be a staple of their collection and just a few weeks ago we managed to get our hands on one of the, arguably, most sought-after 2019 novelties. We’ve seen many salmon dials in the past and while some have also bestowed this characteristic upon this example, I think you’ll see it is anything but salmon, I’d even go as far to say it has more of a gold hue, with just the slightest hint of pink.

The SIHH 2019 AP Royal Oak Extra-Thin ‘Jumbo’ reference 15202 in 18-carat white-gold is much of the same, which is why it is still so popular and also why it is timeless. It is the same iconic and dependable watch it was 40 plus years ago, albeit with a few tweaks here and there. I think the most interesting fact here about this new 15202 is that this is the first time the ‘Jumbo’ is making an appearance in white-gold, if I’m not mistaken?

The case on this new white-gold RO ‘Jumbo’ is expectedly excellent and measures the same 39mm in diameter, however, 1.1mm has been added to the case depth to accommodate the sapphire exhibition case back. The Genta designed bracelet of the Royal Oak is second to none, with a combination of brushed surfaces and polished bevels, it really showcases the excellence of the manufacture. While the AP folding-clasp is easy to use and the bracelet is extremely comfortable, the weight of the watch, as it is solid gold, is something that one would need to get used to.

The Audemars Piguet 15202BC features the all familiar petite tapisserie dial, which is one of my favourite aspects of the Royal Oak. The ability for the dial to reflect off different gradients based on different light sources is a joy to behold and it is further emphasised by the stark white-gold case. As already mentioned, the dial isn’t salmon per se but as the Le Brassus based manufacture put it “pink gold-tone” though it’s clearly more of a gold hue than pink.

The combination of case and dial of the 15202BC loosely took inspiration from the jubilee edition 14802, though this reference only came in steel and yellow-gold, but dials on that reference were definitely closer to salmon. That said, if you’ve come across vintage RO Jumbo 5402s then you’d have noticed the dials have a tendency to discolour to a warm tropical gold hue – not too dissimilar from this new model, which could’ve been the real source of inspiration, however, this is just a theory of mine…

Powered by the self-winding calibre 2121, which was developed by JLC as the calibre 810, half a century ago, it pays tribute to the original Royal Oak model, embodying the distinctive features and extensive finishing techniques that define the world’s first luxury sports watch. Featuring a bidirectional 22k rotor expertly engraved with the coat of arms for the Audemars and Piguet families, it is finished in true haute horlogerie standards with all edges and screw heads bevelled and polished and the familiar Côtes de Genève on the bridges – providing a power reserve of up to 40 hours.

The Royal Oak Extra Thin in 18-carat white-gold ref. 15202BC, is priced at £49,100. For more information on this new piece, visit the official Audemars Piguet website

The AP Royal Oak Extra-Thin Jumbo has an air of timelessness to it, which is by and large because of one defining factor: good design. Good design is timeless but this element alone isn’t enough. The brand itself also have to believe in the classic nature of the product too – hence its popularity and longevity. Very few watch brands tend to do this and often we see watches that have been upsized, bloated and tweaked beyond recognition that in time fade, simply because it is designed with a “whatever is in vogue” kind of attitude. The Royal Oak was and is a bold design, that still pays dividends today and one that will still look just as ageless and elegant tomorrow.