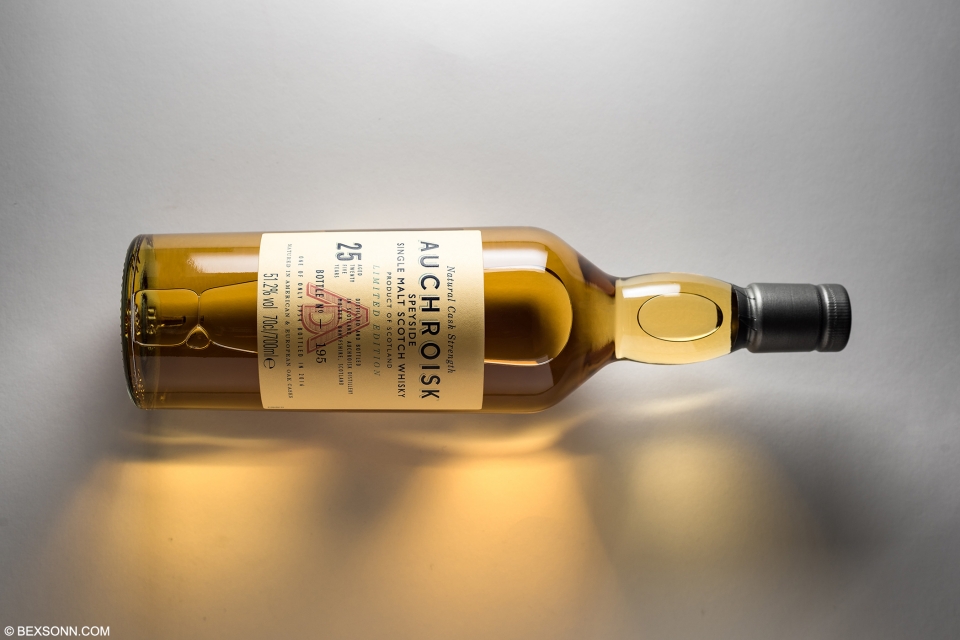 Auchroisk is a rather interesting distillery, and though it has only been standing since 1972, in its short existence it has already made a name for itself. Owned by Diageo, Auchroisk is a large site and actually holds other casks from the many Diageo owned distilleries. Auchroisk is known for being light and sweet in flavour, with apples, honey and notes of a candy like nature, alongside hints of smoke. Part of the Diageo Special Releases 2016 collection, this 25-year-old expression from Auchroisk distillery in Speyside was distilled in 1990. Rarely seen as a single malt, this limited edition is bottled at cask strength from a mix of refill American oak hogsheads and European oak butts. Only 3,954 individually numbered bottles are available worldwide.

On the nose: you’ll get intense notes of sweet red apples, followed by vanilla, marzipan, bananas and coconut. These initial notes are closely followed by pineapples, orange zest and oatmeal. Spicy notes start to emerge, as well as cinnamon, star anise and all-spice. The nose is rounded-off with toffee,  dark chocolate and a  lovely creamy note. palate: you’ll experience those red apple notes, alongside those vanilla, oatmeal and toffee notes. That all-spice note is present, as well as those tropical-like coconut and banana notes. Notes of Madeira and almonds start to appear, along with strawberries, a hint of green herbs and a waft of orange zest. The finish: is long, peppery and spicy, with lingering nuttiness and a hint of smoke.

The verdict: This Auchroisk 25 Diageo special release has some consistently, beautifully balanced notes that just keep offering more with every sip. It’s light, yet full of flavour, with a well-rounded body. For me, this would perhaps be the perfect summer drop but is still as enjoyable at any other time of the year. Bottled at an ABV of 51.2%, this genuinely special bottling is one that, in my opinion, can be enjoyed how you please, though a drop of water does open it up just that little bit more.

For more information on Auchroisk, visit the official website.