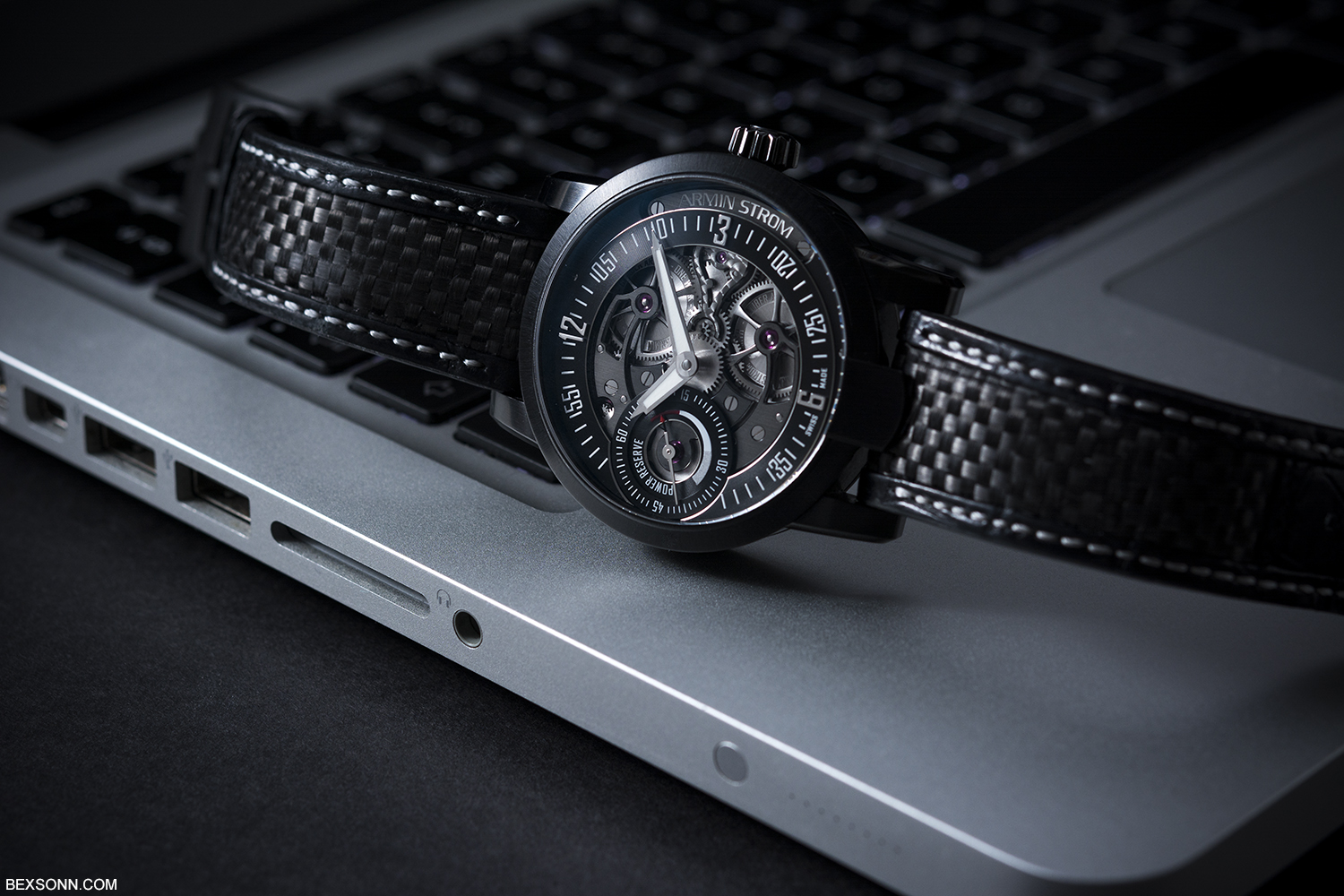 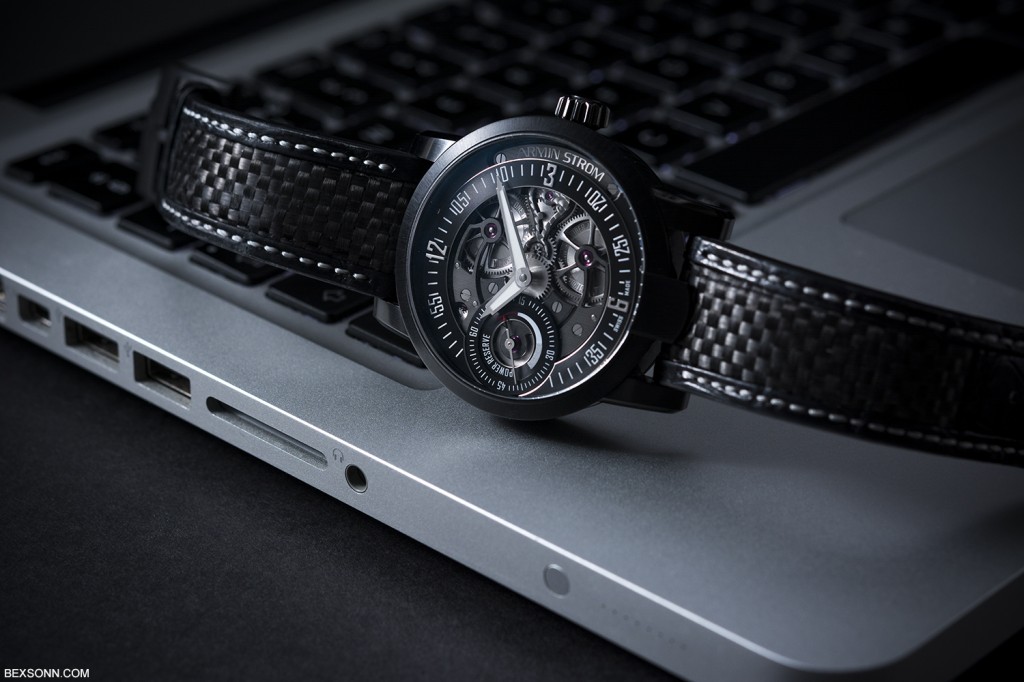 Armin Strom One Week:  Over the last few weeks I’ve had the pleasure of wearing this Armin Strom One Week Earth, in search of signs of what Armin Strom became famed for back in the late 1960’s. Now, Armin Strom has been a watchmaker for decades however they are very well-known for their engraving and skeleton work for popular watch manufacturers. In 2011 at BaselWorld Armin Strom introduced the One Week that comes in a variety of finishes and elements. Armin Strom’s watch collection is heavily centred on the elements, which include: Fire, Water, Earth and Air. The element I managed to get my hands on was Earth and straight away what was evident was the level of engraving but this wasn’t unexpected given their resurgent background.

Back in 1967 the brand’s namesake, Armin Strom, began restoring and selling watches in the picturesque town of Burgdorf (located northwest of Bern – Switzerland). It was here that he honed not only his watchmaking skills but also a distinct prowess for skeletonisation. “His idea of cutting away all the parts of the movement which have no active function for its operation characterises the appearance of Armin Strom watches to this day.” After first presenting hand-skeletonized pieces from local watchmakers at the 1984 BaselWorld show, the brand grew consistently over the following decades. The company was incorporated as Armin Strom AG in 2006, and in 2009 the first in-house Manufacture-Calibre, the ARM09 was proudly presented.

THE ONE WEEK EARTH 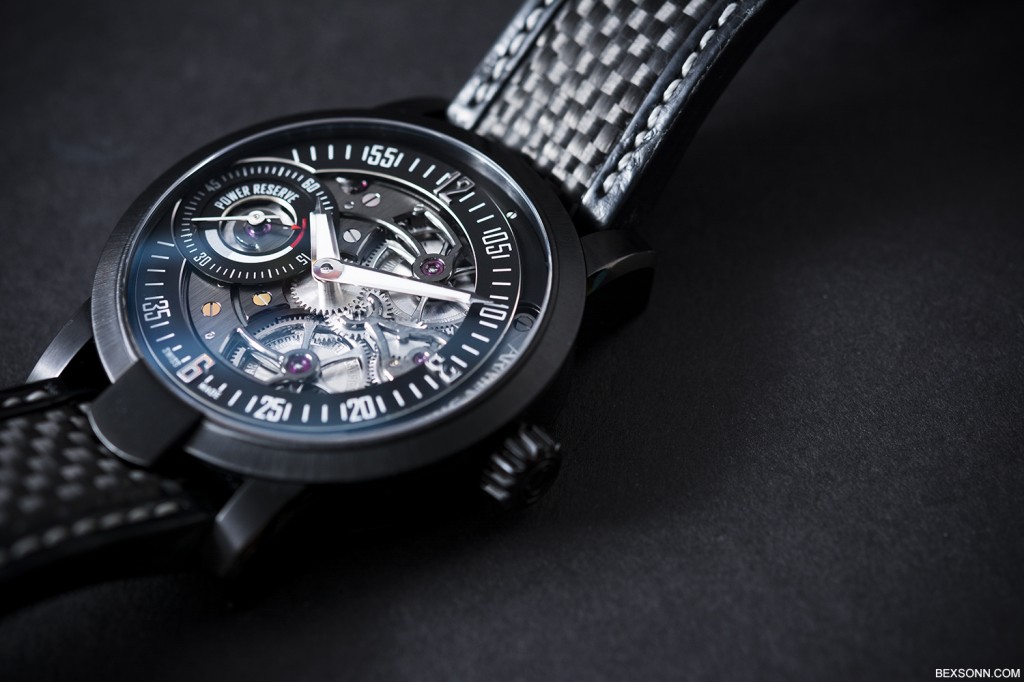 The Dial: I’m going to start with the dial because when I first received this timepiece, I didn’t really appreciate it until I really studied it and embraced the work that had gone into it. The dial is practically made up of multiple off-centre circles. The first circle features the hour and minutes counters, with the numbers 12, 3 and 6 being applied, which creates depth. Within this circle positioned at 9 o’clock is the second’s indicator and then within this circle is the 7-day power-reserve gauge. What was immediately evident though was what Armin Strom is well-known for: the expertly skeletonised main plate, gear-train bridges and barrel-bridges, that creates a dial that exposes just some of its 146 individual components.

However, what I think is well executed in this dial layout is the ease of legibility. There are many skeletonised timepieces around but mostly done from an aesthetical standpoint. The way it has been implemented in the One Week Earth makes it both functional and pleasing to the eye. 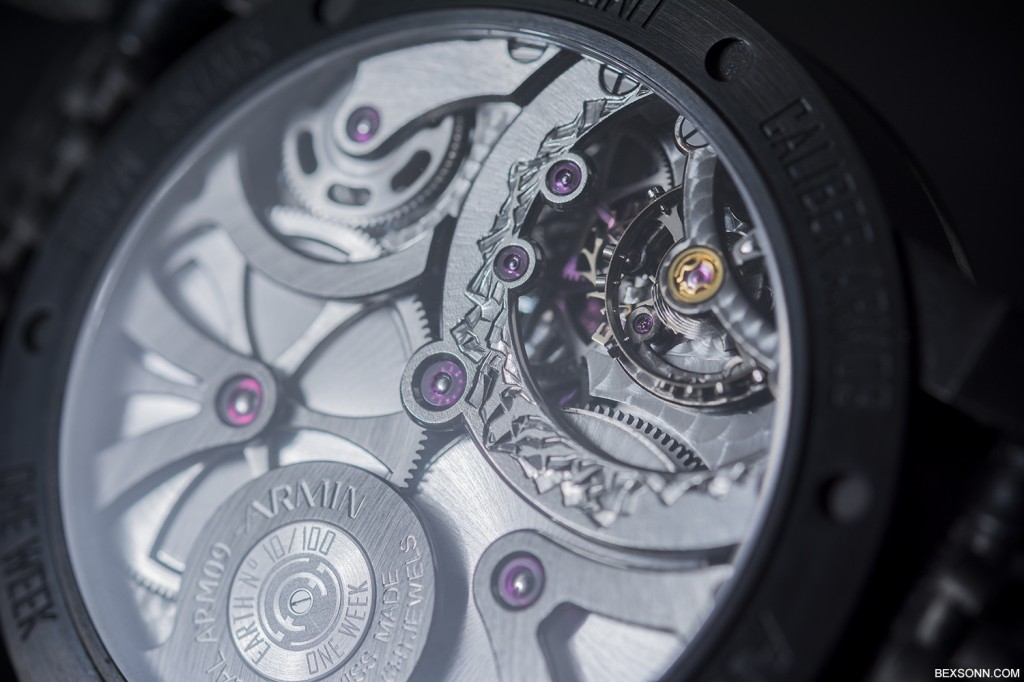 The Movement: Turning the One Week Earth will reveal yet more detailed exposed work and some meticulous engraving. A large opening in the three-quarter plate reveals the balance-wheel and escapement, oscillating from side to side and this opening is large enough to provide a view of the going gear train. The engraving is spread around this opening and displays great attention to detail. Each of the four elements is represented with a unique engraving , the Earth getting a theme of rocks and diamonds. The One Week Earth uses the manual-wound in-house calibre ARM09, which by no surprise boasts a power-reserve of 7 days but what is really cool is seeing the gear-trains in motion through the dial when winding. 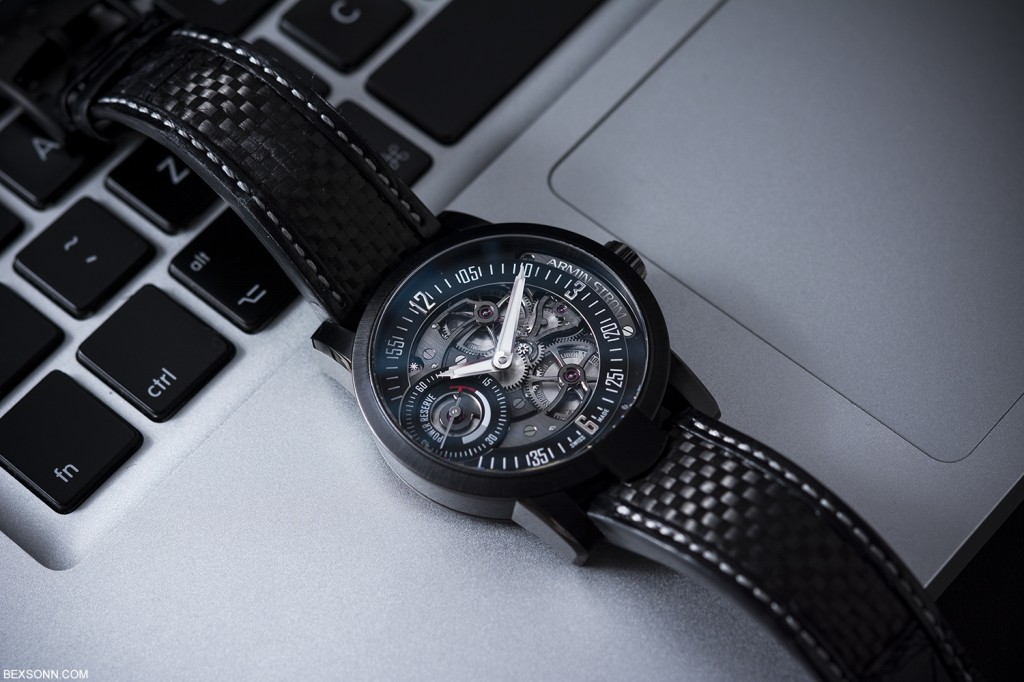 The Case: There is no doubt that the headline act of the One Week Earth is the movement and the case is just – kind of there to contain this artwork and not distract you from the main attraction. And quite a case it is, at 43.4mm in diameter and 13mm in height the Stainless steel black PVD-coated case is just within the realms of what could be considered large for most. For me, it is on the large side. At 6 o’clock is a little tab, which is ever-present throughout Armin Strom cases but it doesn’t really add any real function but is rather more an aesthetic feature of the case. 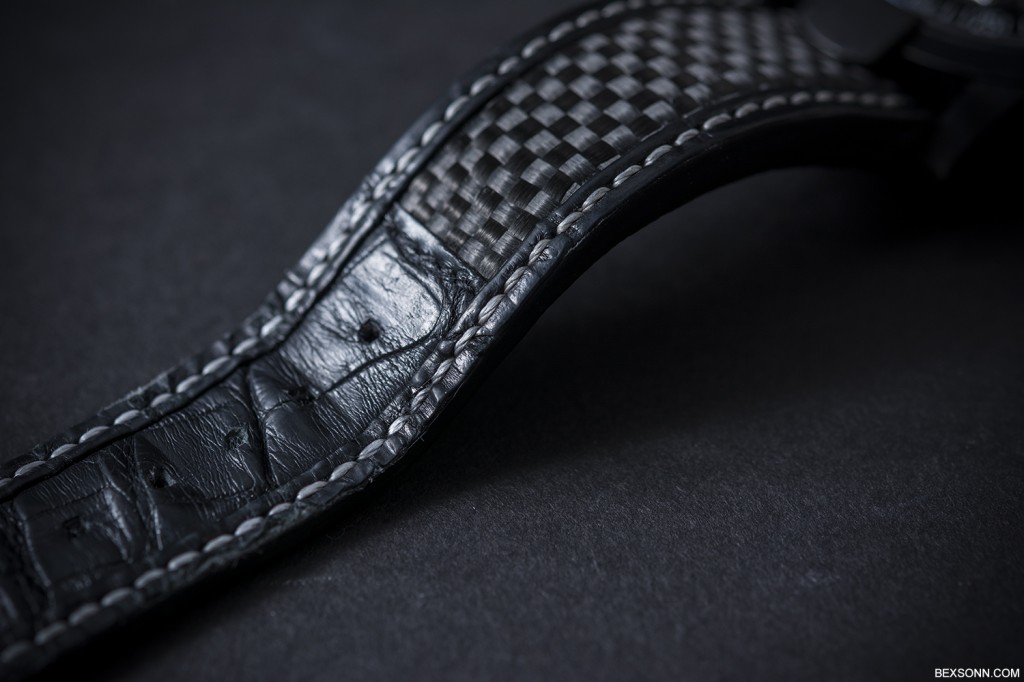 The only thing about the case that really lets it down from being thoroughly enjoyed are the lugs. They look rather long and this is unfortunately due to the way they meet the case. Luckily I managed to get this One Week Earth on half leather, half carbon fibre strap which is significantly slimmer than the horned leather version. Like the case the stainless steel buckle clasp has been coated in PVD. Admittedly this strap makes it much more comfortable to wear on the wrist. 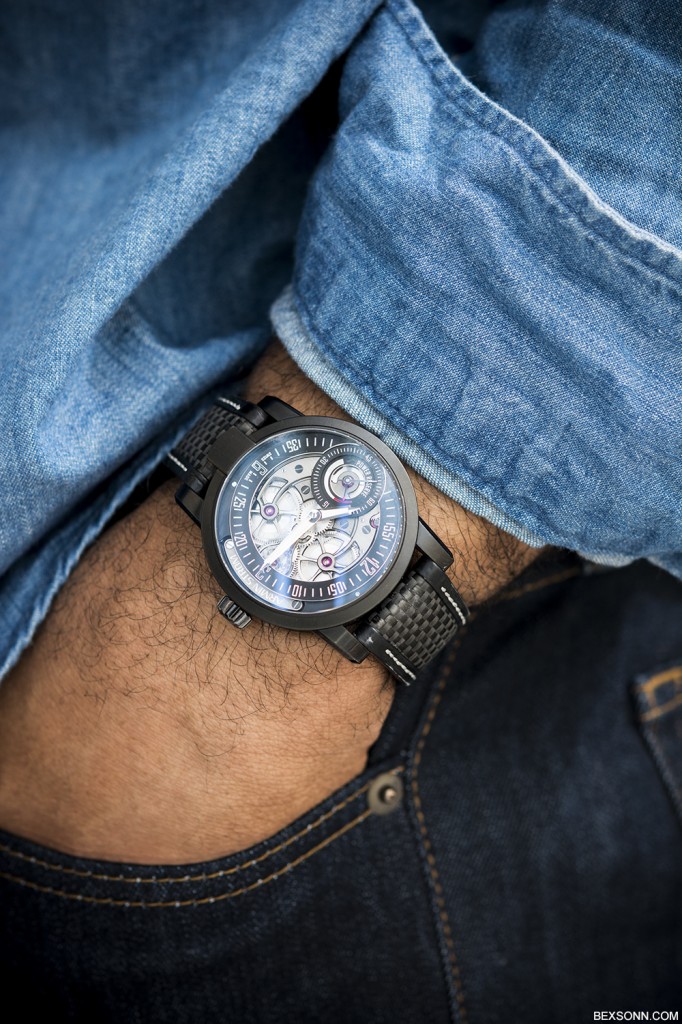 Conclusion: So, after wearing the Armin Strom One Week for, err – 1 week, I must confess it kind of grew on me. Like I already noted, at first I didn’t really appreciate the skeletonisation of the dial but after wearing it for a while all of these little details really stood out. The original heft and size of the One Week slowly wore off and this in turn is what actually allowed me to enjoy it more. What this timepiece practically is, is a well-engineered and finished movement encased in a sturdy case. Armin Strom have designed a beautiful timepiece, which celebrates the mechanics and contours of the movement. What Armin Strom have done is create a timepiece that is unique and for this reason they should be commended.

In all honesty the only thing that really stopped me loving this timepiece were some of the smallest details: the long lugs and the sticky crown. That said, this is probably one of the most intriguing timepieces that I’ve worn; the way the dial sucks you in is just awesome.

The One Week comes in four varieties: stainless steel, black PVD-coated stainless steel, titanium and 18 carat rose gold, with all versions being limited to 100 pieces. For more information on the One Week Earth, visit the official Armin Strom website. 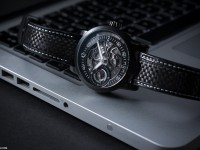 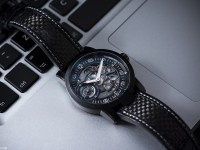 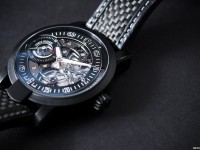 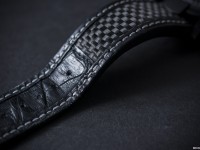 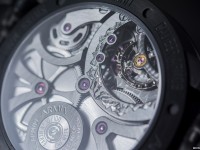 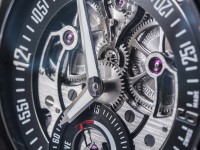 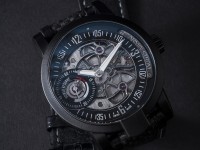 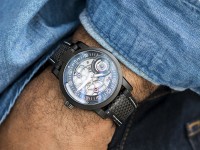