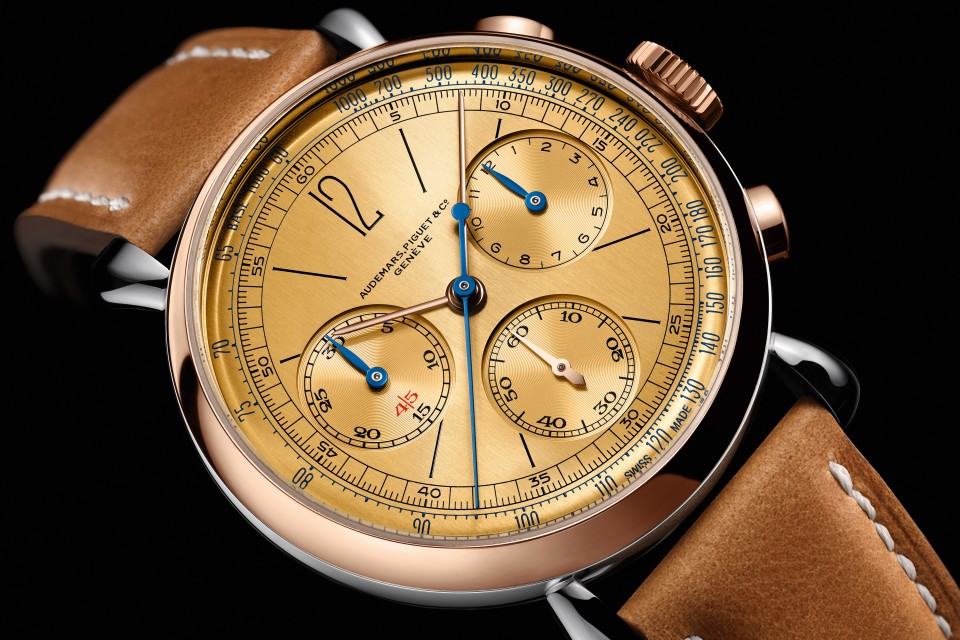 Audemars Piguet have perhaps not achieved the same level of success in the complicated watch department as say Patek Philippe but some of their designs from the earlier part of the 20th century are the very best that watches of that period have to offer. Many years ago, we had the privilege to see some of the of these chronograph models up close and personal, when in the possession of one Mr Margulies. Over the past few years Audemars Piguet have amassed an archive of their most important historical pieces, which they plan on exhibiting in their new museum – when it’s finally opened. Until then AP have decided to release a historical chronograph that has been remastered for the 21st century.

Audemars Piguet’s vintage chronograph wristwatches are known to be the rarest in the world with only a recorded 307 examples ever made between the 1930s to the 1950s. This first remastering project represents what the manufacturer created during the uncertain times of the WWII. Limited to just 500 pieces, this classical chronograph evokes the highly distinct design attributes of the original chronograph wristwatch from 1943, with a two-tone steel and pink gold case that features a stark champagne dial.

The [Re]master01 remains faithful to the original design language of pre-model 1533 from 1943; featuring a round case and lugs in stainless steel, enhanced by an 18-carat pink-gold bezel, olive- shaped pushers and chamfered crown. The elegant teardrops lugs highlight the two-tone nature of the case, while the very thin bezel provides the perfect frame for the champagne dial.

The satin-brushed champagne dial is adorned with black transferred hour-markers, pink gold hour, minute and seconds hands, blue chronograph hands and a blue transferred tachymetric scale. While the dial design has retained the original timepiece’s classic features and Art Deco numerals, the watch’s more modern enlarged 40 mm diameter perhaps affords better legibility. The chronograph counters have also been rearranged for improved readability. Yet, the [Re]master01 has subtly kept the original watch’s 4/5 indication above the 15 minutes mark inside the 30-minutes counter at 9 o’clock to allow the wearer to record up to 45 minutes. This indication is said to be a request by Audemars Piguet’s third-generation family-founder Jacques-Louis Audemars (1910 – 2003) to satisfy his taste for soccer and indicate his favourite sport’s half time.

The [Re]master01 is equipped with AP’s newest generation of self-winding chronograph mechanism, which features an integrated chronograph with column wheel and flyback function. Unlike the original wristwatch of 1943, the [Re]master01 features an anti-glare sapphire crystal case back which affords a glimpse of the chronograph mechanism. Though what’s rather intriguing is the movement that is housed in this new timepiece is the self-winding manufacture calibre 4409, which is part of the family of in-house integrated chronograph movements that Audemars Piguet launched earlier last year in the CODE 11.59 collection. The calibre 4409 is a modified version of the calibre 4401; hence the removal of the date but AP have added an elegant 22-carat pink gold oscillating weight; that has been decorated with a “Clous de Paris” motif.

Audemars Piguet have quite the history when it comes to chronographs and I personally have longed for some vintage inspired chronographs from them. However, I never quite expected it in the guise of a remastered timepiece. Of course, I’m yet to see this piece in the metal so I shall reserve full judgement until I’ve done so but it will be interesting to see how the [Re]master01 translates the design of the original example into this new contemporary façade.

The [Re]master01 Audemars Piguet Selfwinding Chronograph is exclusively available at AP boutiques and is limited to 500 pieces. It is priced at £58,100, for more information visit audemarspiguet.com.