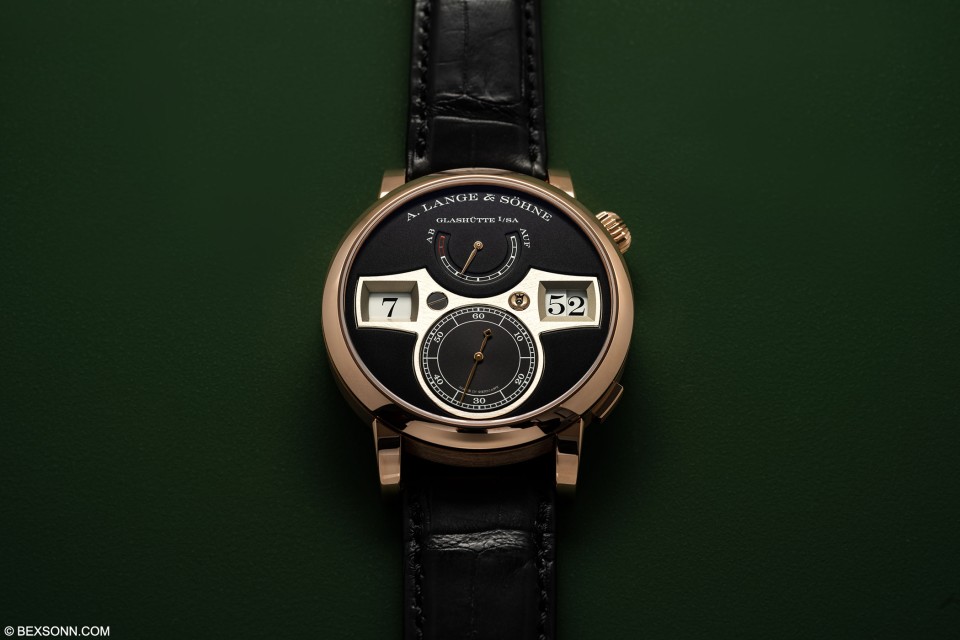 The Zeitwerk is arguably one of the most beautiful modern digital jumping hour wristwatches –period. This year Lange introduced a new complication to the Zeitwerk: a precise jumping date but as you’ll probably know by now, this is no ordinary date display. As you would’ve likely heard me mention in the past; I’ve always been intrigued by the Zeitwerk and it was good to see these being assembled in person when we visited the Manufacture in Glashütte. It was rather interesting to learn that the Zeitwerk is the only piece made by Lange that is assembled from start to finish by the same person.

When Lange introduced the Zeitwerk in 2009, it was one of the first mechanical wristwatches to feature a constant-force escapement and precisely jumping digital displays that indicate the hour and minute with jumping numerals have been commended with multiple awards. Within a fraction of a second, the unique mechanism advances the numeral discs, even simultaneously incrementing all three discs at the top of the hour. 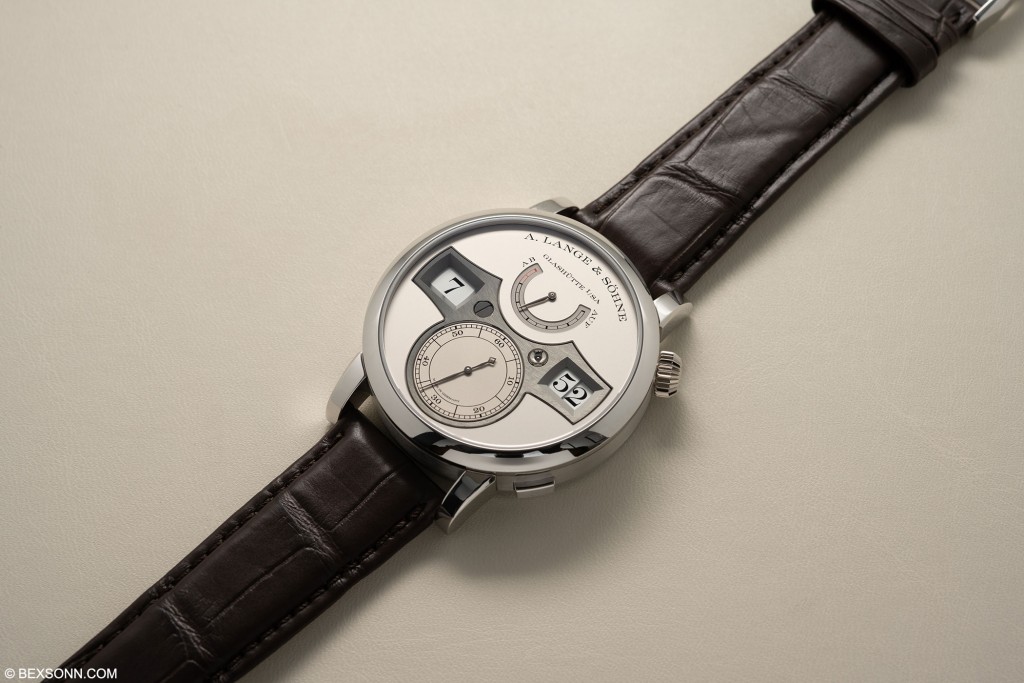 Over a decade later and Lange have seen it fit to completely overhaul the Zeitwerk, but not in a major way, more in an evolutional manner. Lange have introduced two new versions of the award-winning mechanical digital watch in platinum and pink gold. Thanks to the evolved calibre L043.6, the exceptional timepiece now has a power reserve doubled to 72 hours and offers even greater convenience. The revolutionary design concept has been subtly reworked as well, enhancing its expressive style. Even though the minute-by-minute progression of the large jumping numerals may seem to be moved by magic, it is precisely controlled by a reliable calibre with seven patents. 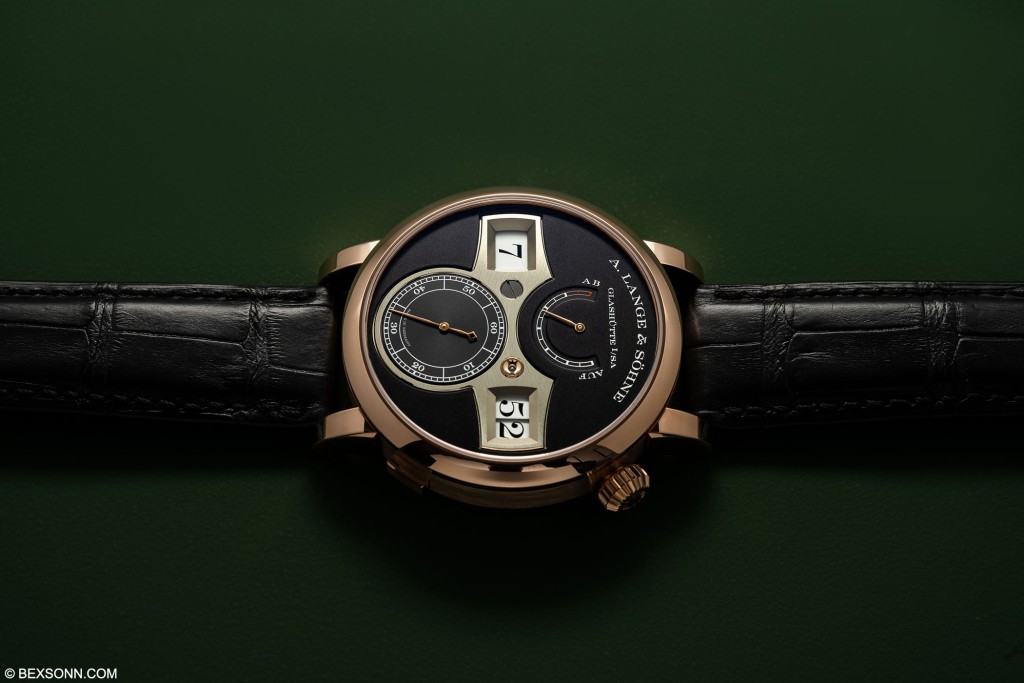 The Zeitwerk maintains its patented mechanism with three jumping numerals discs that make a glance at the watch a special experience. In typical fashion, the hours and minutes are displayed from left to right by large-format numerals that are 2.9 millimetres high and 2.3 millimetres wide. The harmonious arrangement on the curved time bridge and the size of the displays ensures superb legibility. Additionally, this aesthetically original and technically elaborate display gives the dial a certain sophistication with the underlying mechanism switching three large numerals’ discs – one displays the hours, the other two display the units and the tens digits of the minutes – within fractions of a second. The most exciting event happens at the top of the hour when all three numerals’ discs are simultaneously advanced by one increment. With this precise choreography, the moment becomes an event that must be observed. 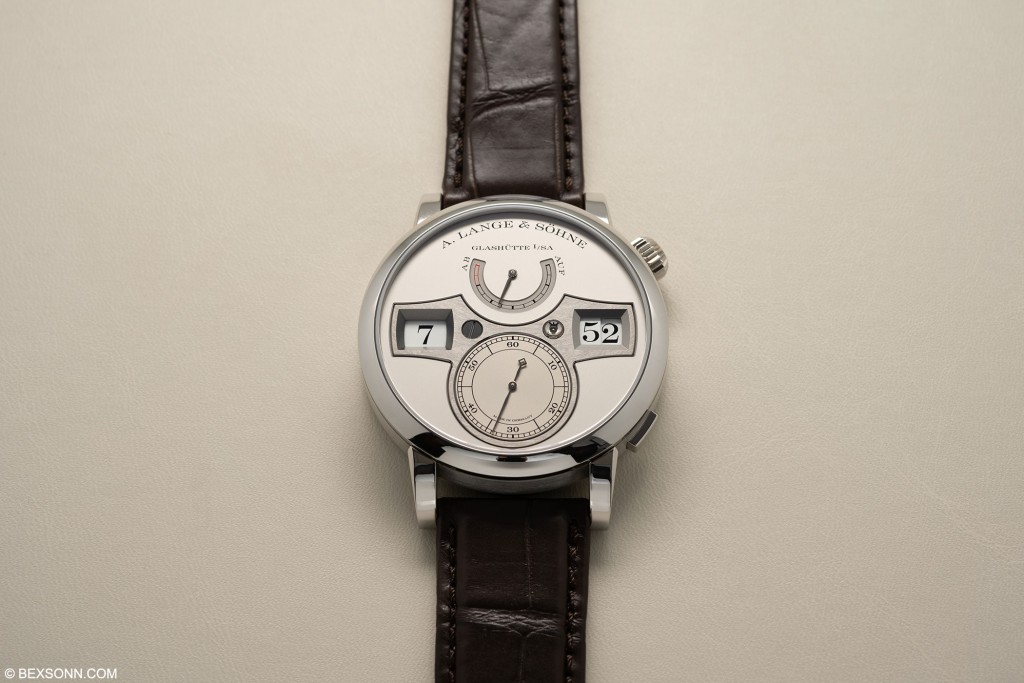 The standout feature of the dial is the time bridge, fashioned out of German silver, a material traditionally used by A. Lange & Söhne for frame parts such as bridges and cocks, makes it clear that it is an integral component of the movement. In the new Zeitwerk, it was subtly reworked to make more room for the subsidiary seconds dial at six o’clock. In the scale of the power-reserve indicator on the opposite side, harmoniously positioned above the round of the time bridge, the last twelve hours are now marked in red to clearly indicate that the tension of the mainsprings is gradually depleting. The sapphire bearing jewel for the ones and tens-minute ring to the left of the two indications is a refined detail that also builds a bridge to the movement. 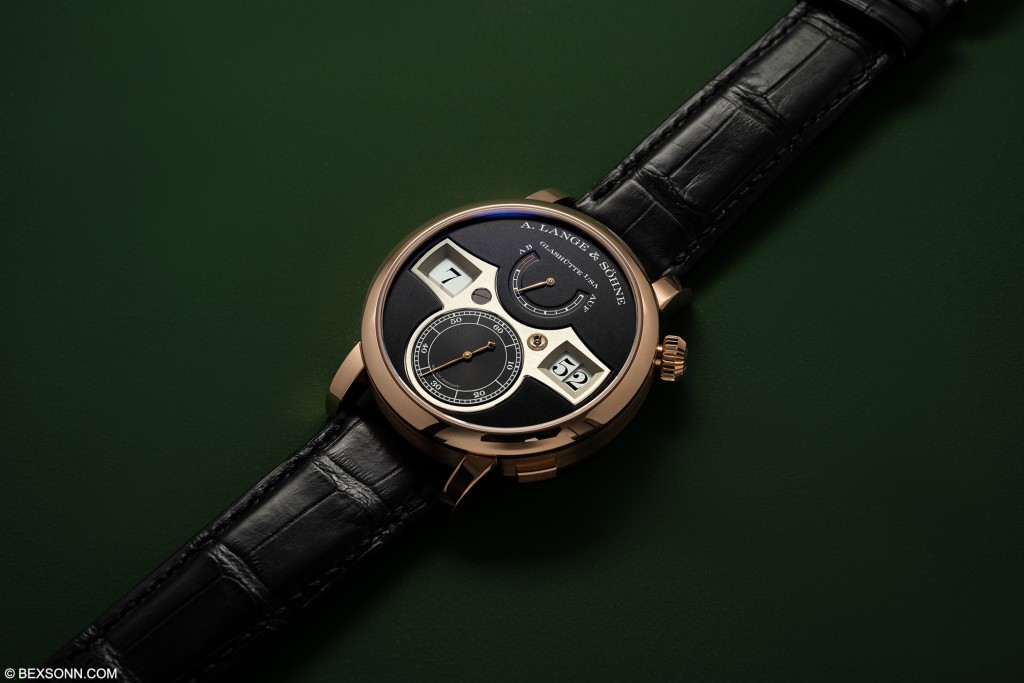 This simple, yet innovative design created by Lange is a challenging feat. You see, fitting the mechanism in the limited dimensions of a wristwatch and at the same time providing enough energy to produce the synchronised switching steps is enormous. Some key figures make this impressively clear: For instance, the hour ring with a diameter of 30.0 millimetres extends to the outer circumference of the movement. In addition, there are two discs – the tens-minute and units-minute discs. Their diameters are 19.0 and 12.7 millimetres, respectively. Both discs are separated by a height difference of merely 0.2 millimetres, which calls for highly precise settings by the watchmaker. 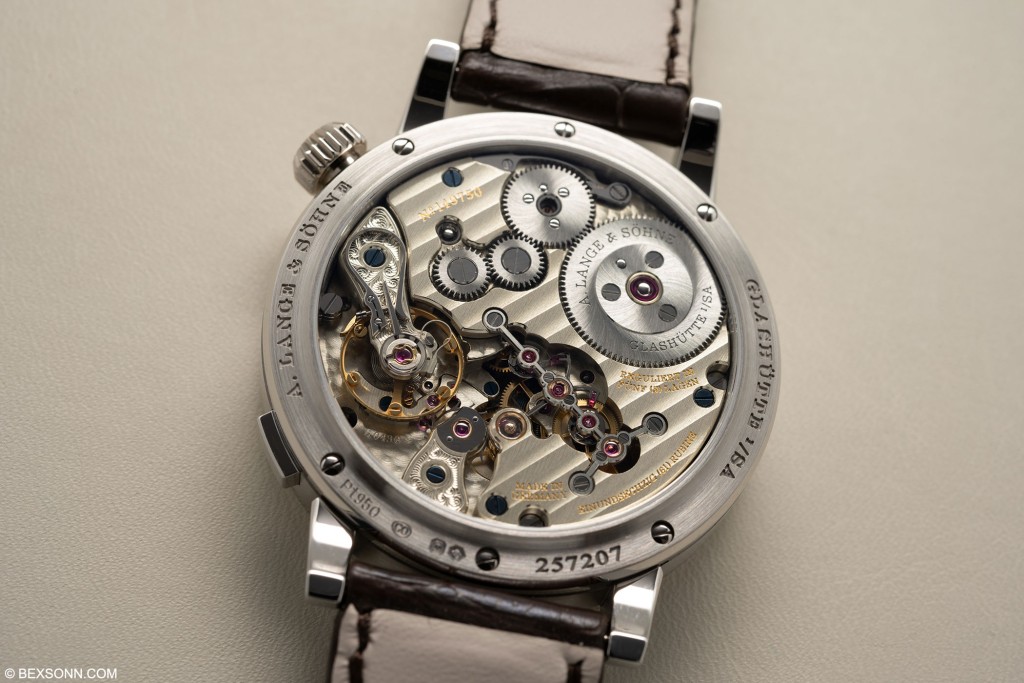 It’s important to note that moving these discs take up a lot of energy, and this is something that take places each minute. These heavy discs not only need to be moved but also precisely stopped, and this requires considerably higher forces than the uniform rotation of a pair of hands of much less weight. This challenging operation is handled by the patented constant-force escapement. As a multitalented device, it even makes a further contribution; it assures that the movement is also powered by a uniform amount of force; this benefits rate stability. 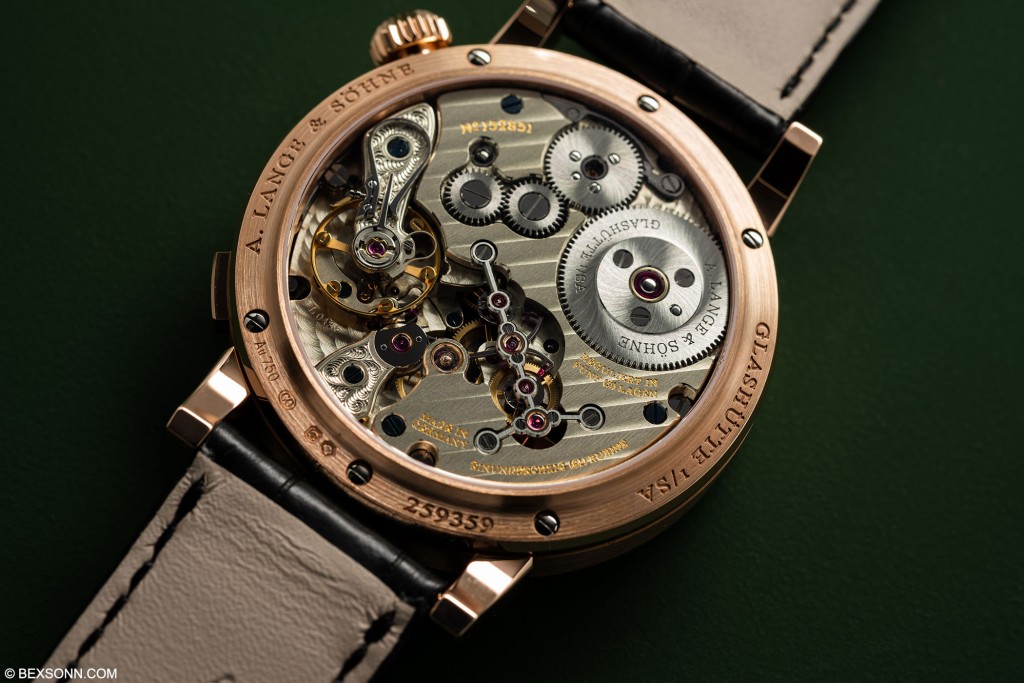 Of course, none of these challenges overcome are new – as these were mastered in the first generation Zeitwerk. However, this new generation of Zeitwerk makes use of a new and refined calibre L043.6. This new movement now has double the power reserve of the 1st gen, up from 36 to 72 hours. Another improvement versus the predecessor model is the simplified setting of the hour. A pusher at four o’clock can now separately advance the display, which is particularly useful when the time zone changes during a trip. The pusher is an inverted type: Nothing happens when it is pressed but the display switches forward when the pusher is released. 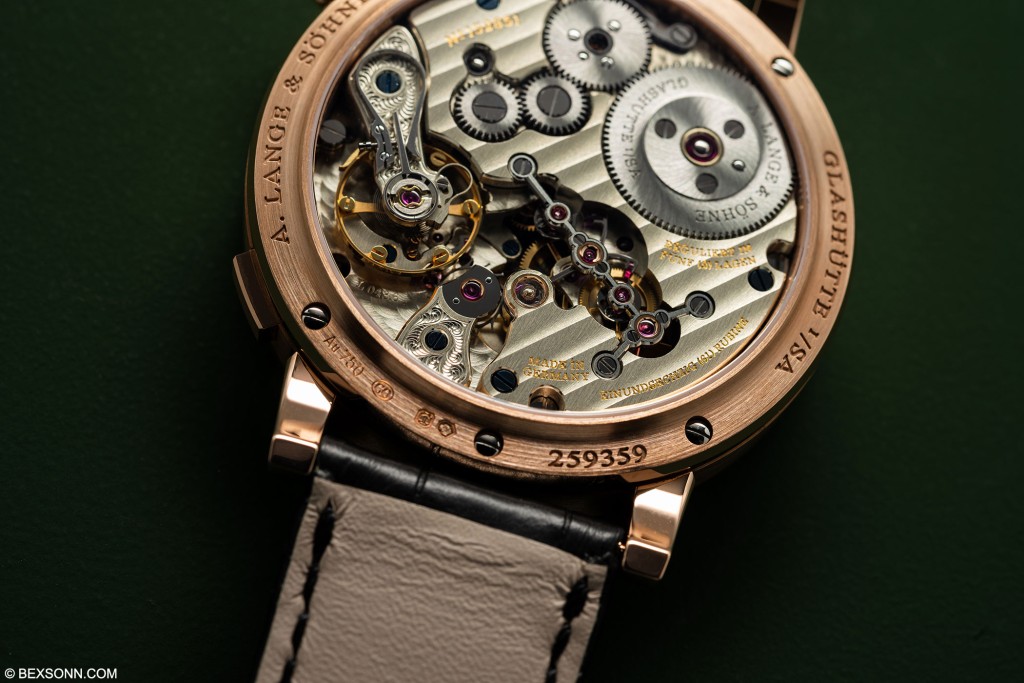 The integration of a pusher for correcting the hour indication, first introduced in the Zeitwerk Date, required considerable constructional effort. To enable the correction independently of the switching cycles of the time indication, a patented vertical clutch uncouples the hour ring from the jumping numerals mechanism each time the pusher is pressed. The setting of the minute indication in both directions is still performed with the crown at two o’clock. In typical fashion, the new in-house calibre L043.6 includes the lavish finissage of the 451-part movement that we’ve come to expect from Lange. All this goodness can be viewed through the sapphire-crystal caseback.

The new Zeitwerk has a case diameter of 41.9 millimetres and a height of 12.2 millimetres and is available in two versions. It comes in pink gold with a black dial and a time bridge made of untreated German silver. The platinum edition has a rhodié dial made of solid silver. The time bridge is black rhodiumed. Colour-matched hands round out the harmonious design. The pink- gold model has a black alligator leather strap while the platinum version is paired with a dark- brown alligator leather strap.

One of the main concerns that is always levelled at Lange is that some of their timepieces can perhaps look a bit unemotional and sterile – though this is down to personal preference in my humble opinion. I think the Zeitwerk is one of the more fun pieces Lange produces and the inclusion of a jumping hour function is a welcomed addition. The balance of the second generation Zeitwerk remains more-or-less the same, with a layout which boarders on quite playful. However, if there is any criticism, the only one I can think of would be the watches size and this is in reference to its height on the wrist but this is down to personal preference.