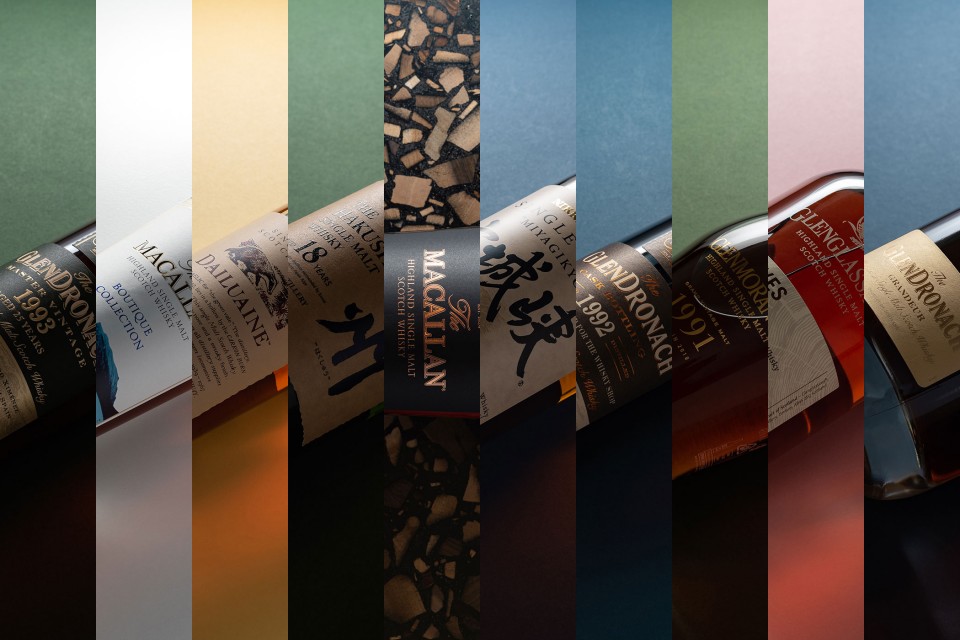 It’s the end of another great year of whisky tasting and believe me when I say we’ve tasted some truly great stuff this year. With that in mind, we thought we’d recap on some of our favourite drams tasted in 2019. A great thank you to all of our followers for reading our tasting notes and thoughts on the whiskies/whiskeys we’ve tasted in 2019. We now look forward to another fantastic year of whisky tasting in 2020 – see you there!

It is no secret that The GlenDronach has been mastering an elegant, rich and robust Highland Single Malt, matured in the finest Pedro Ximénez and Oloroso sherry casks from Andalucía in Spain. Now, after twenty-five years slowly maturing in precious sherry wood, The GlenDronach is pleased to announce the release of The GlenDronach 1993 Master Vintage.

United Distillers started the F&F series in 1992 consisting of 26 different single malts. Originally the range did not have a name. However the late whisky writer Michael Jackson nicknamed it the “Flora and Fauna” because of the various depictions on the labels. The name has stuck, and is known worldwide as Flora and Fauna. Dailuaine is known for being rich with dried fruits, moist with sherry, with an unctuous texture and full-bodied.

Hakushu is known for being a “green and fresh” whisky, praised by the most curious whisky connoisseurs and lovers of gastronomy. This particular single malt is produced with a combination of: new and refill American oak barrels and new Japanese oak casks – these combine to make a delightful fresh single malt, packed with intriguing flavours with plenty of depth.

Macallan limited editions are sort of becoming de rigueur, however, this special bottling caused quite the commotion when first released in 2018. The Macallan Genesis Limited Edition marked the creation of the iconic Distillery in a unique collaboration with internationally acclaimed architects Rogers Stirk Harbour + Partners. The special bottling tells the distinctive story of Senior Partner and Lead Architect, Graham Stirk’s vision for the aesthetic of the new Distillery and reflects each step in The Macallan whisky making process.

We’ve posted tasting notes on quite a few of the Miyagikyo expressions from Nikka, including their non-age statement, 10 and 15-year-old. However, this time round we looked at an expression somewhere in the middle of those two that caught our attention.

Each year, Master Distiller, Rachel Barrie, specially selects a handful of individual casks from the warehouse at GlenDronach distillery, to be bottled as a ‘Limited Release’. With maturing whiskies that date back as far as 1968, there is an array of cask selections available: from hogsheads to puncheons and butts. With such a vast selection at Rachel Barrie’s disposal, each and every cask lends some remarkable varying characteristics that have developed during maturation. This particular expression was bottled exclusively for The Whisky Shop and also won best whisky over 25-years-old by Jim Murray of the Whisky Bible.

Glenmorangie are renowned as one of the pioneers of wood-finishing. In 1991, when this whisky’s spirit was distilled, that art was still in its infancy. But even then, the Distillery’s whisky creators were alive to the possibilities that a wood finish could bring. And so, they began a period of intense experimentation, intent on creating new techniques and flavours. Both long-aged in bourbon casks, each had been finished in Oloroso sherry casks or in Burgundy casks for more than a decade. With a master distiller’s flair, he married them, softened by a hint of whisky aged in new toasted oak, to create an expression of rich intensity.

Over the years, Glenglassaugh added some new expressions to their range. One of those latest additions to their series represented a new chapter for Glenglassaugh and included the distillery’s Octaves limited yearly release. Master Distiller, Rachel Barrie, has carefully selected a number of casks to be bottled as the Glenglassaugh Octaves Classic. The whisky has been matured in octave casks, made from staves of a used cask that are approximately 1/8th the size of a butt.

At the end of last year, GlenDronach released The Grandeur Batch 10, an exquisite marriage of some of the oldest and most unique Pedro Ximénez and Oloroso sherry casks from the distillery. A selection of sherry cask puncheons and butts have been maturing in our traditional dunnage warehouses since the 1960s. It is only some of the most extraordinary and remarkable which have been carefully chosen by our Master Blender, Rachel Barrie, for this special twenty-seven-year-old bottling of The GlenDronach Grandeur Batch 10, limited to 2293 bottles.